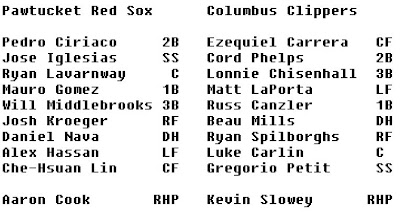 Columbus Clippers win again, of course, 6-4. The loss and the blown save goes to reliever Tony Pena Jr, Jose De La Torre gets the win in relief.

Pawtucket Red Sox starter Aaron Cook, who has one foot out the door, pitched 6 1/3 innings and gave up three runs on five hits. And Pawtucket was leading 4-1 until the sixth. Columbus left fielder Ryan Spilborghs hit a two-run single in the sixth, changing the score to 4-3, but yeah, Red Sox were still ahead.

Cook got the first out in the seventh inning, then split for Andrew Miller. Miller got the last couple of outs with K's, so that was nice for him.

The eighth inning is where all the bad stuff happened. Third baseman Lonnie Chisenhall singled off Miller, so Miller got mad and left. Tony Pena came out of the bullpen, gave up a single to Matt LaPorta. First baseman Russ Canzler flew out to right, Chisenhall tagged and scored on the sacrifice. And then, yuck, DH Beau Mills homered. Pena must have appeared anguished enough to get removed, because Arnie Beyeler called in Alex Wilson to replace him. And get some outs. And try and win a ballgame.

Che-Hsuan Lin hit a two-run double in the fourth inning, in case you were wondering. Pawtucket got ten hits off Slowey, but where did it get them? Shame on you, Tony Pena. The only superhero named Tony is Tony Thomas, evidently.

they say kevin slowey is an asshole:
1. Two RBI for Alex Hassan. Thanks, Elvis!
2. Jim Massie breaks it down for you: "Mills won it with a home run that bounced atop the roof on the balcony in right field. Jeremy Accardo worked the ninth for the save and ended the game with a double-play grounder, the fifth twin-killing of the evening for the Clipper defense." Is it me or does he sound smug?
3. Kevin Slowey talks about his faith, which is on a short list of things baseball players publicly talk about aside from baseball.
4. "Cook has a 1.33 ERA in Pawtucket, but he also has more walks than strikeouts. It's normal for him to have a low punch out rate, as he's an extreme groundball pitcher, but seeing someone who has pitched in the majors for 10 years give up just a few runs in a small sample against inferior competition isn't as thrilling as the context-less ERA makes it look." - Marc Normandin DOES NOT MESS AROUND.
5. I didn't forget you, Josh! Kroeger grounded into two double plays.
6. I thought Justin Germano was supposed to start this game?
7. SoxProspects.com forum comment of the day: "WMB collected 2 LD singles to CF." I didn't say it was earth-shattering. I also really dislike the whole 'WMB' thing.
8. Middlebrooks update: William's hands were shaking as he took his glass of wine.
9. I'll bet Aaron Cook is loving the attention, lording it all over place. His mind is made up, but what can he say? He should just tell people that the answers will all be revealed when his book comes out.

Tonight! Justin Germano, I promise. And Corey Kluber. Come on, Red Sox. Don't get swept.
Posted by Jenks at 7:05 AM