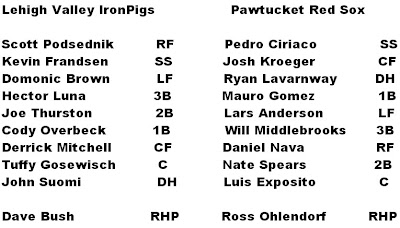 Starter for Lehigh Valley was Dave Bush, who you may recall from the Brewers. Bush only gave up one run through five innings, so the IronPigs must have been feeling pretty good about the 32-piece set.

But then came lefty reliever Raul Valdes, who probably should have stayed in bed. Sixth inning, center fielder Josh Kroeger singled to left. That's fine, Valdes got Ryan Lavarnway to fly out to center. But Lavarnway's not the only slugger on the team, not that you care. Mauro Gomez, first baseman and lover of life, hit a home run! 3-0 Pawtucket!

And now, left fielder Lars Anderson. This position change bothers me on a fundamental level. You remember how distraught I was when they made Brandon Moss play first. Well, this is the same thing. Although, who knows, maybe Anderson is thrilled to be in the outfield. I'll bet you a million dollars he is not.

Anderson got on base with a single to right, which is the point I am trying to make. And then Will Middlebrooks followed that with a single of his own, setting things up nicely for Daniel Nava. And Nava hit a home run, which is nice for him. It's weird that he's still hanging around, right?

Valdes managed to get the last two batters out, but it was 6-0 Pawtucket and the hits just kept on coming. Inning eight, Middlebrooks led off with a home run. Some other crap happened, and then Luis Exposito hit an RBI double. This was Jeremy Horst pitching. After Exposito, Horst got yanked like a rotten tooth in favor of David Purcey. Oh, cool, I love Purcey. Purcey got the last couple of outs, but a comeback was not in the cards for Lehigh Valley. See you guys in June.

The point of all that is Ross Ohlendorf pitching six scoreless innings. He's a big leaguer, after all. And also Chorye Spoone getting a couple of scoreless innings for himself. And Garrett Mock on his little trembling, spindly legs, pitching the ninth and putting a couple of runners on before finishing the game all over the IronPigs face. I like to give the home team pitchers short shrift.

snowshoe, pennsylvania:
1. Luis Exposito hit two doubles. Neither Lavarnway nor Nate Spears got a hit.
2. McGair's gonna tell you all about it, and then this other thing where Luis Exposito acts like he gives a crap about Cuba.
3. Scandura, where the hell have you been?
4. Noise Nation's Dipro again with a cool blue game summary.
5. The next time Pawtucket plays Lehigh Valley, it will be in their park. With me there. Because I am going. I am inordinately excited about this.

One more thing: When I first started this thing, no one else was talking about Pawtucket. And now we have plenty of people so, you know, you guys are in pretty good hands and I can leave. Take care.