4.23.12 Pawtucket Red Sox v Durham Bulls - no one said that this life was easy 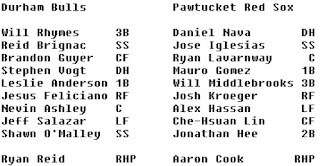 Pawtucket wins again, 7-1. This game was icky in many ways. It was gray and miserable and cold and it just sucked seeing Durham lose over and over. It was too much, my heart couldn't take it.

Starter for the Red Sox was Aaron Cook, and I know you heard all about it but Cook did A Very Good Job, pitching the whole seven innings and giving up only one run.

And Romulo Sanchez? You kind of can't take your eyes off this guy, because he looks like no one. As I said before, he's like a cross between Jose Lima and Bartolo Colon, but you might want to sprinkle a little Gustavo Chacin in there. I'm trying to imagine him in Japan... Someone should have made that movie. I would watch the hell out of it.

Speaking of making movies, McCoy Stadium plays this little featurette before the fifth inning soft toss which shows Paws and Sox tucked away in bed. But, wait! They oversleep and have to race to the ballpark! Well, let me tell you something: This movie is FLAWED! It shows Sox hastily getting out of bed... But you can clearly see that her bed is PERFECTLY MADE UP BEHIND HER! I mean, what are we to believe, that this is some sort of a ... heh heh... magic bed or something?

Anyway, back to Romulo Sanchez, who you can't help but imagine what it would be like to have sex with. Top of the fifth, Sanchez walks Danny Nevada. Iglesias follows with a decent single. Sanchez gets Lavarnway and Gomez to strike out (no mean feat, truly, but then Middlebrooks. Yeah. Home run. Of course. He's totally Lavarnian right now.

And now here's a thing that pisses me off: Whenever someone talks about calling Middlebrooks up, you always get someone else who rather snottily points out that "WMB" is just streaking right now and he never draws walks and who knows if he can hit big league pitching anyway? It's only been a couple of weeks, stop being stupid about minor leaguers, Stupid. To which I say, shut the fuck up and get on board. There's being cautious and then there's just being contrary to the point of absurdity. He should totally get called up.

Josh Kroeger also hit an RBI double in that inning. I didn't forget about you, Josh.

Will Rhymes hit an RBI in the seventh for the Bulls' only run.

in my mind i'm blowing brandon guyer:
1. I'm blowing Brandon Guyer in my mind. (Sorry.)
2. SoxProspects.com forum feature comment: "Sorry for those who are interested/excited about Aaron Cook, who is basically a 1.5 WAR pitcher and a WHIP that's never been much below 1.40. That in the NL West. Actually the thought of him starting for a team with this pen is kind of terrifying to me." - posted by 'Guidas'.
3. Sure, why not? Here's PawSox Blog
4. I sat a couple of rows behind someone who was evidently the world's biggest Mauro Gomez fan. In the middle-to-late innings, the ballpark was largely vacant and way quiet. Gomez Fan's hoots echoed throughout McCoy. It was funny. Even Gomez gave the guy a wink and a nod.
5. Someone out there wishes Reid Brignac were DEAD!
6. How is it even fair that Rich Hill did not pitch in either game? I love Rich Hill! I mean, I love him, but I'm not in love with him.
Okay, I'm in love with Rich Hill. Look at this picture and tell me he's not irresistible.
Okay, I'm done. I just blew any credulity I ever built up. Thanks for that, Self.
7. I cracked myself up in the seventh inning when Will Rhymes was batting. The score was 7-0 and there was a guy on base. I would have paid cash money if Aaron Cook had IBB'd Rhymes. Baseball has no sense of humor. But I do.
8. And WTF: There was a woman in the Ladies' Room during the entire game, just talking on her phone. I wonder if she was just cold?

Tonight! The Yankees! Or the Scrankees.. Or that new name they're using to sell more merch... Either way, fuck those guys. Alex Wilson will hopefully take down DJ Mitchell. Come on, Alex Wilson! Rhode Island needs this!
Posted by Jenks at 12:14 PM