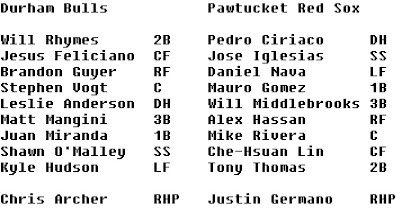 Pawtucket scored the first run in the first inning. Catcher Mike McKenry... Mike Rivera, whatever... Rivera singled, Nava crossed the plate. What could be more simple?

Second inning, center fielder Che-Hsuan Lin led off with a double, made it home when Tony Thomas singled right after him.

Andrew Miller pitched the seventh inning to preserve the lead, get the save.

oh, misery, what's gonna become of me?
1. Eric Benevides Woonsocket/Pawtucket paper game story is here.
2. SoxProspects.com forum comment: "Andrew Miller says; "Who eez Daniel Bard?" I was the ace at UNC not him. Make me the closer. Clean inning with 2 k's to get the save for Pawsox. Just kidding. I think " - posted by 'gregblossersbelly'
3. I did not know that Josh Lueke was a rapist. This Purist Bleeds Pinstripes does a great job with this story... I recommend checking it out.
4. "I have no problem with Archer getting hit right now since he just needs to pound the zone and get used to relying on a defense. Romero also got hit around a little, but for guys that have control issues I have no problem with them getting hit." - commenter 'Sandy Kazmir' on DRaysBay
5. "Because these 11 losses have come on the road, none went into extra innings, and two games were these shortened minor league style double headers, the Bulls pitching staff has thrown 15 fewer innings over this stretch. (Home team doesn’t come to bat in the bottom of the last inning if they are winning.)" - Watching Durham Bulls Baseball, looking on the bright side.

Game two on deck. It just gets worse from here.
Posted by Jenks at 10:03 AM