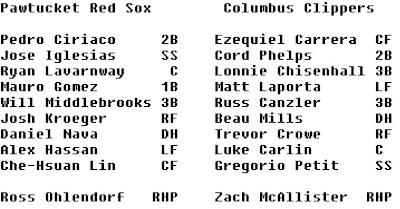 Columbus WINS! 4-1, because they are a steamroller. They whacked the shit out of Ross Ohlendorf, too. It could have been worse.

Your handsome starter for Pawtucket was the aforementioned Ohlendorf. Dorf (he told me I could call him that) pitched six innings, giving up two runs on ten hits. Wait, that's interesting, let's talk about that.

Bottom of the first, no score. Right? With one out, second baseman Cord Phelps doubled to center field. Third baseman Lonnie Chisenhall squandered an opportunity by striking out. Phelps advanced to third on a wild pitch, then - Look out! PED XING! - scored a run on a single by LF Matt LaPorta. Russ Canzler and Beau Mills followed suit with singles of their own, but Matt LaPorta was out at home, thanks to Josh Kroeger's remarkable (I'm assuming) throw from left field to Lavarnway. I didn't forget you, Josh! 1-0 Clippers.

The Red Sox tied the game in the fifth inning, when Kroeger hit a solo home run to right, his first of the season. It was off Zach McAllister, who I forgot to tell you was the starter for Columbus. McAllister was undeterred by the shot and went on to pitch seven innings of one-run ball. He's big! He's strong! He's ZACH!

Ohlendorf gave up a second run to Columbus in the sixth inning, when Luke Carlin hit a line drive single to right, scoring... Beau Mills? Yeah, Mills. And then when Andrew Miller came in, Matt LaPorta hit a two-run homer. Miller pitched one inning, with the home run and three strikeouts. He did throw 25 pitches... I don't know, I don't know what Miller's problem is. Maybe put him in Greenville for now. (YES I REALIZE THAT IS NOT AN OPTION.)

Post-McAllister, we got Frank Herrmann for an inning and Chris Ray to close it out. Mark Melancon pitched after Miller and did far better, if you wanna look it up.

trevor crowe is still on the clippers:
1. Aside from Kroeger's home run, only Lavarnway and Iglesias got hits. HT to McAllister, I guess.
2. Nice lead-in, Jim Massie! "The game sped by like quick-step night on Dancing with the Stars, which allowed Clippers starter Zach McAllister to find a rhythm quickly within his preferred pitching style."
3. “I felt good the whole night,” McAllister said. “I thought I had pretty good fastball command, for the most part. For a whole game, this is probably the best it’s been (this season).” (ibid.)
4. "Russ Canzler and Beau Mills followed with singles, but the right fielder Kroeger knocked off LaPorta at the plate with a strong throw to end the inning." - So you see I was right about Kroeger's throw to home. I just want you to recognize my rightness. Italics were there already, honest, I swear on yo mama's face!!!
5. Okay, I added the italics.
6. I know you secretly want to bang Frank Herrmann, so here's some audio where he talks about pitching and baseball and stuff. It's XXXhotttXXX!
7. Cleveland fans widely consider Matt LaPorta to be pretty much a bust. I'd say nothing, because I am nice, but I would agree inside my own head.
8. Frank Herrmann has a puggle. I feel for him. Puggles are berserk.
9. I don't wanna turn this into the Frank Herrmann show, but here's a rather good interview.
10. Scouting report on McAllister from The DiaTribe:

Scouting Report: McAllister is a big, durable righthander who was acquired from the Yankees at the trade deadline in 2010 for Zach McAllister. He doesn’t have the type of stuff that you expect when you see his 6’6” frame, as he is more of a command and control guy rather than having overpowering stuff. He has a four-pitch mix, throwing a fastball, curveball, slider and changeup. His fastball is his best pitch, as it is a sinking offering that comes on a downward plane accentuated by his height. It sits in the low-90’s, so he needs to command it well and keep it down in the zone because he’s not going to throw it by many hitters. His secondary offerings are average, but he doesn’t really have a plus secondary pitch to rely on. He has a clean, repeatable delivery and has been extremely durable throughout his career, throwing 149 innings or more in 3 of the last 4 seasons.

Thank you, Al Ciammaichella!
11. SoxProspects.com forum comment of the day (regarding Melancon): "I couldn't think of a better time to bring him back up. He's averaging 2 Ks and inning through 4+, and hasn't given up a run or walked anyone. Very curious as to what the counter-move will end up being. Atchinson has looked good outside of the other night, when he was pitching after pitching two innings the night before. Tazawa has looked even better, but he has an option. My guess is he'd be the guy, at least until Atchinson or Albers implodes. " (diehard24)

TONIGHT! Justin Germano v Kevin Slowey. Still in Ohio. Should be a real battle. I can't wait to see that ballpark.
Posted by Jenks at 10:30 AM