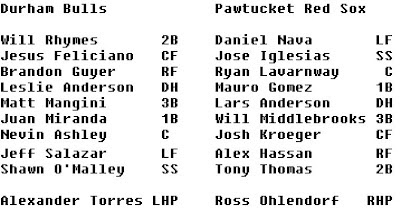 Pawtucket WINS! 9-5. Gomez is starting to happen, I promise you. Even though I saw him referred to as 'Pedro' in the Pawtucket paper yesterday.

Starter for Pawtucket was Ross Ohlendorf. Ohlendorf pitched 5 2/3 innings, giving up four runs on six hits. So that was a professional win for him. He also had a personal win when he shot his apple core at a trash can across the room and got it in.

Tampa Bay Durhams had slightly less success with their starter, Alex Torres. Or Alexander, I guess he wants me to call him. Torres gave up a two-run homer to Mauro Gomez in the first inning, which couldn't be helped, really, since Gomez is clobbering everything lately. And then a solo home run to Wm. Middlebrooks the next inning over. I mean, Christ. He's this season's Ryan Lavarnway and Ryan Lavarnway's at a Reddick level.

So home runs, so what? But Torres led off the third inning by issuing three consecutive walks. One of them was Jose Iglesias, so you know things weren't pretty on the mound. A sac fly brought in another run, bumping the score up to 4-0.

Outfielder Daniel Nava, who is seriously going down that Jeff Natale road at this point, hit an RBI single in the fourth inning which led to the excision of A. Torres. Jhonny Nunez in to face Mauro Gomez with the bases loaded. Good thing Nunez is so composed and professional. Either way, Gomez flew out to center and I'll bet the crowd went nuts, thinking the ball was gone. Good work, Nunez.

The Bulls started getting to Ohlendorf a little bit in the sixth because they don't want your god damn pity. Second baseman Will Rhymes led off with a triple... It was a fly to right and Rhymes must have been chugging. Ha. I would have liked to have seen his little legs pumping. Center fielder Jesus Feliciano, who you loved as a Buffalo Bison, singled Rhymes home. Ohlendorf got the hot-hitting Brandon Guyer out, but hit Leslie Anderson with a pitch. And third baseman Matt Mangini... Who you can just tell by looking at, like, hey, this asshole must play third... Mangini hit a line drive single to right, scoring Feliciano.

Next guy was Juan Miranda and Ross Ohlendorf is now a hero to me, because he hit Miranda with a pitch. Yes, I know it was unintentional... WASN'T IT? It was, and it loaded the bases. Catcher Nevin Ashley popped out, but Ohlendorf walked Jeff Salazar and brought another run home.

Ohlendorf punched out and went home and Mark Melancon stepped in, swinging his lunch pail. Melancon took on shortstop Shawn O'Malley, who certainly has a strange name for a shortstop. O'Malley singled to left! Mangini scores! 6-4 Red Sox!

Durham scraped up one final run in the eighth, when Nevin Ashley hit a solo home run off Rich Hill, who I love. But that was all. Garrett Mock closed the game out. Leslie Anderson was the last clear chance with two runners on, but he grounded into a double play instead. Not even Garrett Mock expected that.

ten puppies:
1. Paul Kenyon's game story will do.
2. In case you missed it, Will Rhymes shaved his mustache in the middle of the game. Now just get Jeff Salazar to do it.
3. Watching Durham Bulls Baseball is not thrilled with Durham's pitching.
4. Just a link to a blog called maddonomics, solely because I like the name!
5. James Crowell with some SoxProspects stuff. Why does that name sound so familiar? Why do I want to call him 'Jim'? Was that a player from the IL?
6. YES IT WAS!!! I knew it had to be because I could hear his name in Jim Martin's voice. This is why Jim Martin should never, ever leave.

TONIGHT! No, today, sorry. It's Sunday, they don't play minor league night games on Sundays. Normally. It's Justin Germano and allegedly Jhonny Nunez, although he pitched in relief in this game so that seems strange. But then, Triple-A is a strange, strange place. Like that weird bar with all the dead animals in it on Lonsdale Ave.