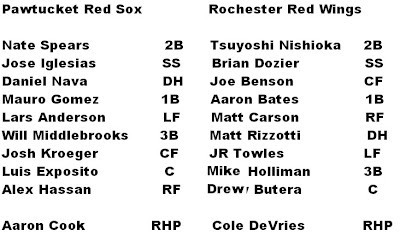 Your lovely and delicious Pawtucket starter was Aaron Cook, who's two letters short of being a 'Cookie'. Cute, right? Cook pitched five innings and gave up two runs on six hits, one of them a solo home run by third baseman Mike Holliman.

Junichi Tazawa once again satisfied those who are into his game, pitching two innings and striking out four batters. Okay, Tazawa DID walk catcher Drew Butera, the dude batting ninth, but otherwise everything was cool and I'm sorry you had to miss it.

Righty Clayton Mortenson came in for the final two innings and got the save. They say that he got crazy once and tried to touch the sun.

Okay, now Rochester pitching. Their starter was Cole DeVries. I know you know who he is. DeVries also pitched five innings, but he only gave up one run. That was the third innings, when outfielder Alex Hassan led off with a double and scooted home on an error.

Round come the sixth inning, DeVries was replaced by righty reliever Carlos Gutierrez. And the first thing he does is walk Jose Iglesias, which should have told everyone right away how things were going to go. Iglesias made it to second on a passed ball with Nava at bat. The wicked funny part is that Gutierrez then hit Nava with a pitch. Funny for me, maybe not for Danny Nevada. And here comes Mauro Gomez, A Hitter. Gutierrez was probably shaking and possibly crapped his pants when Gomez hit a hard liner to left, but JR Towles snagged it and nothing happened.

Gutierrez struck out the next batter, Lars Anderson, but then he had to face Will Middlebrooks. This unnerved him so much that he threw a wild pitch... The runners moved up, but overall it didn't matter much because Middlebrooks hit his second home run of the year. LOL.

Red Wings manager Gene Glynn finally had mercy on Gutierrez and replaced him with Casey Fien, who was on the Red Sox for like one minute. Fien got the final out and pitched a couple more innings for good measure. Brendan Wise and Tyler Robertson assembled to finish up the game, keeping the Red Sox scoreless. Nice work, everyone except Carlos Gutierrez.

governess, fanciless:
1. Alex Hassan went 3-4 with a double. Aaron Cook is now 2-0.
2. "Everyone related to the team is talking about the Red Wings carrying three catchers on their roster. All have big league experience and are solid defensively as Drew Butera and J. R. Towles have thrown out three of the four runners attempting to steal. With two outfielders dealing with minor injuries, Manager Gene Glynn was forced to play a catcher in left field the last few games." - Twinkie Town
3. "Gutierrez was removed from the game with an apparent shoulder injury. There is no word on his condition." - The WGOM

This afternoon, Pawtucket visits Buffalo. Alex Wilson will be opposed by Garrett Olsen. They should be starting soon. I'll just sit here and wait.
Posted by Jenks at 10:54 AM