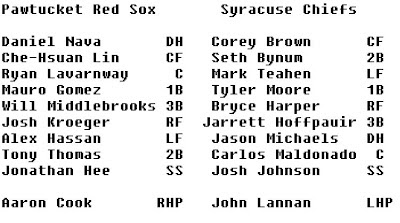 Pawtucket wins 6-1, but not the way you think. Aaron Cook impresses everyone with his win... No, Cook didn't get the win. The game was tied at one until the eleventh, so Clayton Mortenson gets the win. That's glory for you. Syracuse reliever Hassan Pena (?) bore the weight of the loss on his back like a rotten papoose.

The Chiefs scored first, like in the third inning. DH Jason Michaels led off with a ground rule double. Catcher Carlos Maldonado followed that with a single, Michaels to third. Shortstop Josh Johnson grounded into a force out and Michaels scored. Things could have gone a different way if Josh Johnson hadn't been caught stealing. Things could also have gone a different way if I'd become a nuclear scientist, but here we are, and Josh Johnson never made it to second base.

Pawtucket didn't answer back until the sixth inning, when Will Middlebrooks hit a solo home run off starter John Lannan, who fucking hates it in Syracuse. Tie game.

No one budged until the eleventh inning, and I'm sure it was getting nice and cold for the fans (paid attendance: 2844). Pitching change: Ryan Perry out, Hassan Pena in. Oh, by the way, Ryan Perry was pitching. Anyhoo, Hassan Pena. Will Middlebrooks and Josh Kroeger hit back-to-back singles to get things cracking. Pena walked Alex Hassan to load the bases.

With this delicious plum dangling in front of him, Tony Thomas could not be blamed for swinging. He grounded into a force, with Middlebrooks out at home, 3-2. Shortstop Jonathan Hee was up next... And Pena walked him! Awww... That sucks. Run scores, Red Sox lead 2-1.

New pitcher, Josh Wilkie, kicks it off by striking out Daniel Nava. Okay, two outs, the Chiefs maybe had a chance. But, no, because Che-Hsuan Lin had his eatin' dress on. Lin doubled, line drive to left, and cleared those bases. 5-1.

But Pawtucket was not finished. Ryan Lavarnway, catcher and scholarly article, hit a liner to right, scoring whoever was on third base. Oh, Lin, that's right, duh. Lin scored. 6-1.

Chorye Spoone pitched the eleventh inning and the Chiefs hit him a little bit, but nothing happened. And although Pawtucket starter Aaron Cook pitched eight two-hit innings, allowing only one run, and coming off the hill having thrown a pretty reasonable 92 pitches, Mortenson gets the W. WE ALL KNOW WHO REALLY WON, MORTY!

will middlebrooks plays drunk better when he's pool:
1. "Syracuse, now 3-10, did manage what looked to be a huge hit in the bottom of the 10th inning. With the score tied, 1-1, Jarrett Hoffpauir walked and stole second. With two outs, Josh Johnson singled up the middle with an apparent walk-off single, but Pawtucket center fielder Che-Hsuan Lin, playing shallow because Johnson is not a power hitter, threw a strike to home plate to nail Hoffpauir with the third out of the inning." - News you can use from Syracuse dude Tom Leo.
2. By the way, Jarrett Hoffpauir is absolutely no relation to Micah. Okay? So shut up about it. God, is there some kind of rule that two baseball players with the same last name and weird first names have to be related? Sure. And I own a mattress company.
3. Lin, Lavarnway, and Middlebrooks got three hits apiece. Pawtucket had 13 hits overall, Syracuse 5. Oh, geez.
4. "What do you think is going to happen to John Lannan? Unless he has direct deposit, given his luck lately he'll probably get mugged trying to cash his paycheck at the bank in whatever podunk town the bus has pulled into on the first and 15th of the month." - commenter 'Feel Wood' on Nats Insider (Ha.)
5. Wow! I love this game summary on From Section 207. MORE IL FAN BLOGS PLZ.
6. Hassan Pena defected from Cuba. He has a weird name, but at least it's not 'Tyler Moore'.

It's Zach Duke. Possibly with the relief corps of Basie, Miller and Satchmo. Have fun!
Posted by Jenks at 5:35 AM