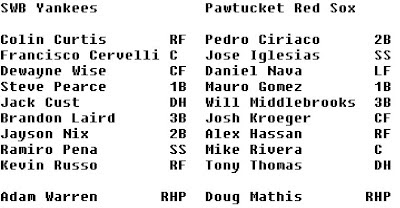 Righty Doug Mathis got the start for Pawtucket and had the whole world in the palm of his hand until the middlish innings. He did, however, have the lead when he left the game, so whatever else you can say, at least he kept Pawtucket in the game. WAS THAT ENOUGH COMMAS FOR YOU?

Starter for SWB was Adam Warren. Pawtucket had a very nice time with Warren, indeed. It was Daniel Nava in the first inning with two outs that got things going when he singled to left. It was a nice set up for Mauro Gomez, who hit a home run for all the little people. 2-0 Red Sox.

Pawtucket also had a very robust third inning, hitting a couple of home runs and other very nice things to score three runs. Please note that Pedro Ciriaco hit his first home run of the year, right at the top of the inning. I'll bet you can't guess who hit the third inning's other home run!

Doug Mathis cruised through the first three innings, but after a walk and a single in the fourth... Oh, gross... DH Jack Cust hit a three-run homer to bring the score to 5-3. Scranton added another run in the fifth inning, when Francisco Cervelli hit an RBI single. 5-4, and I go oh no.

Post-Mathis, the PawSox used five relievers, starting with Andrew Miller. Miller was all over the place, with a wild pitch and a hit batter and a walk, but he didn't allow any of this scoring nonsense. Rich Hill pitched the seventh inning and he didn't fuck around, getting three down in order with two strikeouts. Total pro.

I saw Will Inman for the first time this season, pitching the eighth. And did you know it was Garrett Mock's birthday? Perhaps he was drunken when he pitched the ninth inning. I don't know, but I was unhappy with his appearance even before he barfed runs all over the place. I would not have chosen him to save the game, solely because I felt he was overdue for a crap inning.

Shortstop Ramiro Pena led off with a single. Mock was feeling generous on his special day so he walked RF Kevin Russo and RF Colin Curtis. Yes, the Yankees played two people in right field yesterday. It was pretty unorthodox. (I messed up on my scorecard.) Bases loaded, no outs for beloved Yankee Francisco Cervelli, who hit a two-run single and delighted the many, many Yankees fans at the park yesterday. Tie game! But not for long, because a sac fly by Steve Pearce put another run on the board for SWB. And then when Mock walked Jack Cust, something had to be done. And that Something was Chorye Spoone. Spoone gave up a single and a run that was credited to our friend Garrett. That was it, but that was enough.

The score was 8-5 going into the bottom of the ninth and Pawtucket loaded the bases with no outs. Daniel Nava, bless his heart, went deep to right and sacrificed to get the runner over. But Kevin Whalen got Gomez and Middlebrooks out, which is pretty badass when you think of it. But don't think of it. Don't.

is 'anxiety' baseball code for 'substance abuse'?
1. Daniel Nava had a good day, going 3-4 with a double.
2. I figured out who new catcher Mike Rivera reminds me of. He looks like Carlos Maldonado with some of the juice sucked out. Really!
3. I was hoping I could use the expression 'Alex Hassan, Yankee Assassin', but Hassan didn't do much at the plate. He did make a sweet play in right in the first inning, though. Thanks, Alex.
4. Brendan McGair doesn't find it necessary to mention the Yankees starting pitcher Adam Warren, but read his thing anyway.
5. SoxProspects.com forum comment of the day: "So nice to see WMB putting it all together. He and Bowden were two prospects I thought were massively underrated all those years ago when Lars was considered a blue chipper. Hope all the best for Bowden in ChiTown as well." Misty memories from poster DonCaballero.
6. The Yankees were rather dissatisfied with the home plate umpiring of AJ Johnson, who was pretty generous with strikes in the early going and then pulled back a little late in the game. That's just my opinion, though. That's the view from my seat.

Off day today, then Ross Ohlendorf in Columbus.
Posted by Jenks at 5:46 AM