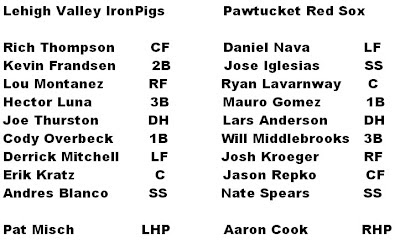 Pawtucket WINS! 4-1 in game one of a double header.

Starting pitcher for Pawtucket was Aaron Cook, who pitched the whole seven innings and it was, what, 89 pitches? 59 strikes, too. Five hits, one run, 2 walks and four K's. Lehigh Valley scored its only run off Cook in the third inning, when shortstop Andres Blanco hit an RBI single.

The IronPigs made Pat Misch go out and pitch. The PawSox got to him first in the fourth inning, when Ryan Lavarnway singled to left with one out. First baseman Mauro Gomez doubled to move Lavarnway over to third. Lars Anderson hit a sac fly... Well, he got onto first base, but only because Lou Montanez in right made an error. So Lavarnway scored. And then Will Middlebrooks grounded into a force, scoring Gomez.

In the fifth inning, Red Sox outfielder Jason Repko led off with a solo home run. Nate Spears and Daniel Nava hit back to back singles, then Jose Iglesias flew out to left so Spears could tag and score. 4-1 Pawtucket, final score, yes.

sex dreams about pawsox players:
1. David Purcey also pitched for the IronPigs. Where the hell has he been? He was on the Chiefs when they were the Blue Jays AAA team. And wasn't Pat Misch a Buffalo guy last season?
2. Nice game summary on the Horn and Bell Noise Nation IronPigs blog.
3. Aaron Cook knew some guy who went to school in Rhode Island this one time. (McGair)

Oh, god, why am I still up? Now the Easter bunny won't come!

I probably won't do game 2 because I am traveling tomorrow, although I suppose I could do it Monday morning. I still have so much I want to talk about, too, but maybe soon.