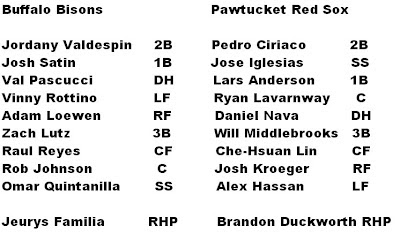 Buffalo gets one back, 2-1. Bisons reliever Dylan Owen gets the win at this sparsely attended game.

Unassuming starting pitcher for Pawtucket was Brandon Duckworth, who worked really hard and did a great job. Duckworth pitched 6 2/3 innings, throwing 97 pitches. In his first start of the season. He looks like such a regular guy. When's the last time totally young and ripped Michael Bowden did that? Answer: Never. I don't want to digress too much (OH YES I DO), but if Duckworth and Bowden stood in front of you, which one would you think would have that pitching line?

Buffalo's guy was Jeurys Familia, A Very Large Righty. And handsome! And a triple-A debutante! Familia threw hard and inside, tight stuff on righties. I could have hit it. He went 4 2/3 innings, giving up an RBI single to Ryan Lavarnway in the first inning. It would be Pawtucket's only run.

Dylan Owen provided long, effective relief for Familia, getting in 3 1/3 innings. Owen gave up a couple of singles, but otherwise stapled things down and went to bed with a smile. And guess who closed? Fernando Cabrera, who was seriously all over the place with the strike zone and put a couple of runners on in the ninth. Alex Hassan went deep to center with one out, one on, but Raul Reyes made a bad-ass catch to rob Hassan. Lars Anderson was the last guy but he flew out to center. Bummer.

Buffalo tied with Pawtucket in the fifth, when third baseman Zach Lutz hit an RBI single off Duckworth. They pulled ahead in the ninth with Tony Pena pitching. Shortstop Omar Quintanilla singled... Reyes dashed home... Valdespin could have piled on but struck out to end the inning.

And then! And then! Radio guy Steve Hyder usually comes down to the field after the game to talk to a player, someone pivotal to the game or something. His selection was Buffalo closer Fernando Cabrera, who rambled on a bit about returning to McCoy Stadium and his difficulty throwing strikes. And it was right there, right in front of me at the visitor's dugout! If I were a flying squirrel I could have leapt and landed on top of him. Cabrera, not Hyder. Although.... No, no, I definitely mean Cabrera. He is still so, so good-looking. Hyder, I mean.

don't imagine you're too familia:
1. Raul Reyes was just just called up to replace Kirk Neiuwenhuis, who was just just just called up. Reyes wore some jersey they found balled up under a seat on the bus. I think it was made of crepe paper and they didn't even have time to iron his name onto it. #48! Also, new radio guy Aaron Goldsmith called him 'Paul'.
2. Pawtucket's got some celestial defense, most notably in the Iglesias area. But you knew that. As a fan, I thrill in my seat.
3. Bobby Scales! Bobby Scales back in the house, coaching first and pinch running. Except he ran right into the catcher at an awkward time for an out. It must have killed him. It certainly killed me.
4. Kevin Pereira has a game summary that you should read, because it makes more sense than all of this here.
5. And here's Toby Hyde for Buffalo: "On a cold April night, Jeurys Familia made his first AAA start in an outing that could best be described as messy; he dealt with eight baserunners in 4.2 innings." It was indeed quite cold. I stayed through the whole thing, though.
6. Middlebrooks and Anderson both went 2-4.

I listened to the radiocast to get a feel for the new guy. Not bad, slightly stiff, maybe a little fundamental. Decent chemistry with Hyder. Made a few mistakes which I thought about listing here but I will cut him some slack. Couple of errors on his blog which I will also refrain from pointing out. I'm sure he'll find his groove as things heat up.

Double-header with Lehigh Valley today. God, I have so much to talk about but so little time! Aaron Cook, Pat Misch game one. Alex Wilson, Tom Cochran game two. I can't go, not that you care. There's plenty of other PawSox coverage nowadays, although none as fascinating as I am. I speak for the fan, you guys. I am on your side. You hate and I hate, you love and I love. LET'S DO IT!!!!