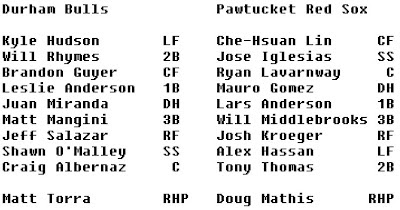 15-10 Pawtucket Red Sox in a game that was the perfect example of entropy. Brandon Duckworth, who worked as a reliever, gets the win. I don't know if anyone really deserved to win this game, but Duckworth's okay. Asshole Bulls reliever Josh Leuke takes the loss.

You Pawtucket starting pitcher was Doug Mathis, who wasted no time in crushing the hopes and dreams of PawSox fans. Mathis pitched 2 2/3 innings, which was rather generous of Arnie Beyeler. Mathis' MO last night seemed to be: Load bases before getting outs. I'll bet he was doing his laundry one day, loading machine before adding detergent, and decided to apply that to his pitching method.

Starter for Durham was righty Matt Torra. I knew I'd seen that face before. Torra hung in for four innings, even though Pawtucket was beating the crap out of him. Although, on each inning's flipside, the Bulls were racking on Mathis pretty good.

It all started last night around 6:20 PM. By the way, I wonder how many people at McCoy last night were stoned? Probably a lot, because the concession stand lines were furiously long and tangled, keeping people out of their seats for innings at a time while they waited for their fish n' chips. But at the top of the first, Mathis gave up a two-run homer to Brandon Guyer. So far, so good!

But Pawtucket bit back in the dumpy lower 1/2, with a two-run homer by DH Mauro Gomez. Gomez was an absolute freak with his bat last night, you guys. He went 4-4 with two home runs. Is anyone talking about Gomez yet? Probably not, since he's not a prospect and therefore doesn't really exist.

Top of the second, Doug Mathis loaded the bases with singles and a walk. The crazy thing was he followed that up with a couple of strikeouts and an infield pop over at first. Nice catch, Lars Anderson.

Bottom of the second, Will Fiddlesticks and Josh Kroeger led off with singles. Second baseman Tony Thomas homered, and I love this kid and his little pants up to his waist and I'm glad he's outta Maine and into Rhode Island. 5-2 Red Sox.

I think the third inning was where you could see the game was jumping the track. Ay, que fiebre. Durham first baseman Leslie Anderson led off with a single. And then... God damn it, Juan Miranda the PawSox killer of legend and lore hit a single for himself. WHEN WILL HE GTFO OF THE IL? Doug Mathis walked third baseman Matt Mangini to load 'em up. But would he escape all this mess? No, because shortstop Shawn O'Malley grounded into a force, runner out at second, Pawtucket trying to turn a double play, Jose Iglesias' throw wasn't good enough, O'Malley safe at first with two runs coming in.

Catcher and local-ish kid Craig Albernaz stepped up and singled, and that was it for Doug Mathis. Tony Pena inherited the slop on base, faced left fielder Kyle Hudson. And Hudson flew out to left... Alex Hassan had the ball. He had it. And he dropped it. I swear it happened just like that. Albernaz scores! Tie game! 5-5!

Fourth inning. Oh, god, the fourth inning. Center fielder Brandon Guyer led off with a single, then stole second. But, wait! Tony Pena got Leslie Anderson out! Guyer to third. But he walked Juan Miranda. And then he hit Matt Mangini with a pitch. Oh, Mangini, you were always someone's fool. Pena then walked Jeff Salazar, bringing home Guyer. I hate that shit. And another run scored with O'Malley's fly ball to center. 7-5 Durham.

A dumbfounded Pawtucket team had no response to that in the fourth. Brandon Duckworth came in to pitch the fifth, giving up a run on an RBI triple by Brandon Guyer. Cool triple, bro. 9-5.

Bottom of the fifth, Mauro Gomez hit his other home run. It would have been two runs, but Jose Iglesias was caught stealing. Iglesias got two hits last night, but there was this and the error so they cancelled each other out. 9-7!

The Bulls half of the sixth really stands out on a scorecard. Duckworth struck 'em out in order. Out of this filthy mess, the sixth inning is alone.

Bottom of the sixth. Romulo Sanchez is pitching, and he's still this enormous weirdo. He's like, if you gene-spliced Jose Lima and Bartolo Colon somehow, plus threw in a few pounds of butter. With two outs, Alex Hassan and Tony Thomas hit back-to-back singles. Che-Hsuan Lin walked to load the bases. And Iglesias singled! 9-8!

Top of the seventh, Duckworth sets down three batters again. Bottom of the seventh, Sanchez out, Josh Leueke in. He's so conceited. All you really need to know is that Alex Hassan hit a grand slam. 12-9 Pawtucket. THAT DOES NOT AUTOMATICALLY EXCUSE YOUR ERROR IN LEFT, ALEX HASSAN!

Eighth inning, Duckworth still pitching. Brandon Guyer leads off with a single. Miranda walked, Mangini singled, scoring Guyer. And you know what? The people next to me promised they wouldn't get up very much, then proceeded to get up like every other inning. So I had to get up and let them pass. At least three people attempted to ruin my experience at the park last night, when all I wanted to do was come and rejoice. But I'll bring those people up another day, as a casual aside in a future game summary. 12-10.

Bottom of the eighth, and you knew Will Middlebrooks was gonna come up at some point. You didn't really think it'd just be that little single in the second, did you? Although, I did see him make a killer throw to first from shallow left that would have gotten the runner out under slightly altered circumstances. Middlebrooks' fielding goes largely unexamined. By me. Everyone else talks about it endlessly over their teacups.

Sorry, bottom of the 8th. Lavarnway and Gomez are on base, of course. Home run Middlebrooks, 15-10. Dancin' Mark Melancon closed the game out, which must have been a real thrill for him. He did put a couple of runners on, but so didn't everybody.

Jim Martin did the PA last night. Didn't he retire? Not that I'm complaining. I feel like he's messing with us. Why can't he just come all the way back?

everything's good until it goes bad:
1. DNP: Daniel Nava, Jonathan Hee, Mike Rivera. Wait, who?
2. Kevin Pereira brings it on home with the game recap.
3. Southern man/Bulls guy Adam Sobsey throws out some restrained despair over the Bulls season. Oh, wait, what's this? Some nice stuff about me? I can't believe it! Suddenly I have credibility and I don't know what to do with it. Kind of like the key I stole from the toilet paper dispenser at McCoy last night.

But, really, you should go read it because there are not enough people writing about baseball who aren't churning out box-score hardtack. And also because it says something nice about me.

4. Know what else I did? I contributed to Watching Durham Bulls Baseball. This is exciting to me because there are very few fan blogs about IL teams, which I have groused about endlessly in the past. We need to form a guild and have tele-conferences. And also form a bar trivia team, because I FUCKING KICK ASS AT BAR TRIVIA. Three perfect rounds last week, WHAT NOW 'BUNNY BULLETS'?

But, I'm seriously, you should go read Watching Durham Bulls Baseball because it's terrific and bright.

5. Shut up, A-Rod.
6. Hey, McGair, how'd you like that game last night? Here he writes about disgraced reliever Mark Melancon.
7. Only Che-Hsuan Lin did not get a hit last night, but I did see him smile for the first time.
8. Home plate umpire Chris Ward did a pretty good job last night. Jeff Gosney... Not necessarily.
9. "Pawtucket Red Sox Win Fifth Strait As They Blast Their Way Past Durham Bulls 15-10" (sic) Hey, McCarthy, how do you get to McCoy Stadium?

Day game today! It's Ross Ohlendorf v Alex Torres. I'm too stuck up to go to weekend games, but you should go check it out. It is the Bulls, after all.

See you tomorrow!
Posted by Jenks at 9:36 AM