4.5.12 Pawtucket Red Sox v Buffalo Bisons - Junichi Tazawa did not wake up with a zit. 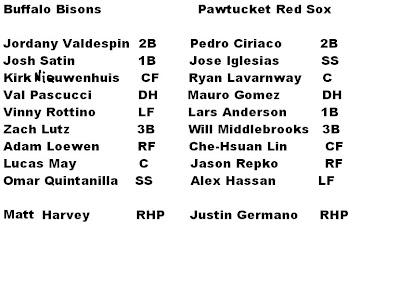 Pawtucket starting pitcher was Justin Germano, who pitched five decent-ish innings, going five and giving up a couple of solo home runs. One was hit by first baseman Josh Satin, the other by Val Pascucci, one of my favorite McCoy visitors. AND NOW I MUST PLAY THE VAL PASCUCCI SONG!

Opposing pitcher was Matt Harvey, not Ryan Harvey, so get it right. Harvey was the Mets #1 draft pick in 2010 and it was his triple-A debut. Harvey worked himself into the fifth inning, but only got one out before being replaced.

Pawtucket scored first in this game, when DH Mauro Gomez singled home Pedro Ciriaco in the third inning. Ciriaco had singled with one out, you guys. In fact, Ciriaco singled in four out of five at-bats. Jose Iglesias couldn't help but stare.

Top of the fourth, those two home runs by Buffalo put them ahead of Pawtucket. This brought me to my knees and I wept for Justin Germano for 2-3 minutes. But my joy and general good humour was restored in the bottom half of the fourth, when Will Middlebrooks led off with a double, made it to third on an error, and then scored when Ciriaco hit one of his little singles. Ciriaco's single to center also brought home right fielder Jason Repko, who had walked earlier. I wasn't going to mention that, but now I have to. 3-2 Red Sox!

Matt Harvey managed to get Ryan Lavarnway to fly out at the top of the fifth, but after he walked Mauro Gomez and Lars Anderson, he got the hook from Buffalo manager Wally Backman. That's BACKMAN. The scoreboard said 'Blackman', but what do all the people know?

Harvey was replaced by righty reliever Jeff Stevens. Middlebrooks singled to load the bases with one out. Che-Hsuan Lin popped up in the infield, but Jason Repko singled to third, scoring Gomez. 4-2!

And then, finally, the sixth inning rolled around and something exciting happened. Germano out, Junichi Tazawa in. And Tazawa looked great! He pitched a couple of innings, walked one guy and gave up a hit, but struck out four Bisons and generally looked commanding. I mean, I don't know anything about anything so please consider that when I tell you that Tazawa's off-speed stuff really dazzled. I can't wait to see how things go for him this season.

And that was it, right? Garrett Mock came in to pitch the last two innings and I expected the worst, considering his past performances/injuries/bad breath, but Mock did reasonably well. He even picked off Jordany Valdespin, who stole like a hundred bases last year.

but i did:
1. In spite of having to wake up in what is essentially the dead of night to do this, I was psyched! I cannot wait to show you all my pitches. I developed quite a little cutter. Figuratively.
2. "The Bisons' Opening Day Roster includes 13 players with major league experience and several key players back from last year. The Herd's most valuable pitcher, right-hander Chris Schwinden, returns after striking out 134 last year. Pascucci also returns after being named the team's MVP last year, leading the club in home runs (21) and runs batted in (91)." - source
3. "Matt Harvey’s AAA debut wasn’t a good one, as he got roughed up for 4 runs in 4.1 innings to take the loss. Jordany Valdespin and Josh Satin had a hit each, Kirk Nieuwenhuis walked twice and stole a base." - MetsProspectHub blog. You know, I should just do game recaps like this. Think how much later I could sleep!
5. Will Middlebrooks went 3-4 with two doubles.
6. "Matt Harvey’s first AAA start was just not very good: 4.1 IP, 7 H, 4 R, 4 ER, 4 BB, 3 K, 2 WP. He threw 57% (54/95) of his pitches for strikes." - Toby Hyde's Mets Minor League Blog. Geez, it wasn't like the Hindenburg at McCoy Stadium.

Okay, whoa, Mets fans. I know your misery and I feel for you. Mets fans are killer bloggers. But part of Harvey's problem was the Bisons defense, which was not doing him any favors. Did you not see the two errors? And it wasn't just the errors. The defense just looked clunky. SO THINK ABOUT THAT FOR A MINUTE.

7. "It's a huge honor," said Harvey, 23. "I wasn't sure going into spring training exactly where I was going to start [whether it was Buffalo or Binghamton]. Wally told me the whole time I had a good chance of going with him. As soon as tbey told me, I was extremely honored and happy. I'm just glad to get the season started." - aqui
8. Can we talk about Buffalo reliever Daniel Herrera's appearance for a minute? I'm talking about his physical appearance. He looks weird. He looks like Chaka.
9. Conversely, I saw Fernando Cabrera, who is perhaps the hottest PawSox player of all time. A couple of seasons ago when he was with Pawtucket, I heard Steve Hyder say on the radiocast that he knew what Cabrera could be if he weren't a baseball player: "A movie star!" So it wasn't just me!
10. Buffalo outfielder Kirk Nieuwenhuis was probably called up after this game.

Tonight! Buffalo Mets again! Brandon Duckworth will take on righty Jeurys Familia in a bare-knuckle fight on the mound. My money's on blondie, but only because Buffalo's a baby deer on ice right now. Are you going? I'm going, even though I still haven't thawed out.