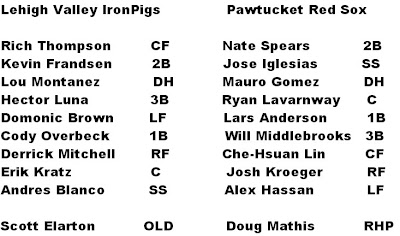 Elarton threw 85 pitches through five innings, striking out four and walking three. He gave up two hits, both crappy little singles by Will Middlebrooks and Nate Spears.

Relievers Brian Sanches, Michael Schwimer, and Jake Diekman took care of the rest. They gave up four more hits, but again, none for extra bases or anything wild like that. Superlative work. Elarton gets the win, lefty Diekman gets the save.

Pawtucket starter was Doug Mathis, who also pitched five innings but committed the cardinal sin of giving up one stinking run. It was the fourth inning. Hector Luna led off with a single, Domonic Brown batted him over. As simple as suffocation with a dry-cleaning bag, really. Clayton Mortenson and Junichi Tazawa wrapped up the whole tamale by pitching two scoreless innings apiece. I know, 'tamale' is not really a word, but if I said 'tamal', it would come off as pretentious. N'est ce pas?

In a related story, Jose Iglesias is a jerk. The bases were loaded in the bottom of the fifth and Iglesias was all, foul, swing and a miss, swing and a miss. I realize that he's not a slugger by any means, but have a little self-awareness and try to work the count or something. I love Iglesias dearly, but come on. Why was he swinging at the first pitch anyway?

a pack of saviors:
1. In case you're like, 'Scott Elarton? Didn't he die?', the answer is yes, he did. However, I strongly recommend reading this little story about Elarton. Thank you, Bob Brookover.
2. Brookover's buddy Matt Gelb sez 'Dubee in Love With Diekman' in this exploratory surgery of an article.
3. Phuture Phillies makes the Case for Jake Diekman to Make the Opening Day Roster. I am certainly convinced.
4. Average height for IronPigs pitchers last night: 6'5". Did the math myself. I know my gazintas!
5. Jason Dipro over at the Noise Nation blog provides a killer game summary. It is criminal that not all visiting teams have fan blogs like that. I'm looking at you, Indianapolis!
6. Doug Mathis hit both Rich Thompson and Kevin Frandsen with pitches. Kevin Frandsen was on the PawSox, remember? No, me neither.

This afternoon, it's Pigs again, featuring Dave Bush v Ross Ohlendorf. Bush is just coming off a suspension for being... For... Okay, it's a little complicated. Read this and maybe you can make some sense of it.

Thanks for the compliment! We took a road trip last year to Pawtucket and loved it.