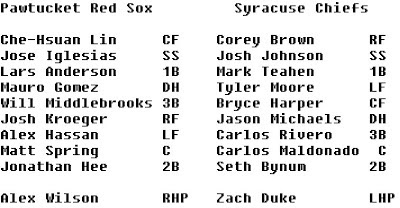 Pawtucket wins again, 11-7. Well. At least the Chiefs got some hits. Alex Wilson must have felt sorry for Syracuse, since he gave up six runs on eight hits. Wilson only lasted 3 2/3 innings last night.

Starting pitcher for Syracuse was lefty Zach Duke. Duke pitched four innings, and did almost exactly just as poorly as Wilson. It was a no-decision for Duke, though, with the L going to reliever Austin Bibens-Dirkx.

The Red Sox got crack-a-lackin' on runs early, with Will Middlebrooks hitting an RBI single in the first. The Chiefs answered back in the bottom of the inning, scoring a pair of runs to give them a 2-1 lead.

And it looks like Will Middlebrooks did it again in the third inning, hitting a three-run homer off Duke. He certainly is chugging along at this level. 4-2 Pawtucket. Bottom of the third, another run for Syracuse. 4-3.

Bottom of the fourth, Wilson still pitching. Syracuse got more hits than Abe Vigoda, with right fielder Corey Brown hitting a two-run homer. Immediately after the homer, Wilson walked the next two batters. Yes, okay, we get it, you're unable to do this right now. ALEX. Enter Chorye Spoone, enter left fielder Tyler Moore. A single from Moore made it 6-4 Syracuse.

Will Middlebrooks led off the fifth inning and did not get a hit, but he reached on an error. After Josh Kroeger hit a line-drive double to right, Zach Duke got cut from the mound, then pasted in the dugout. Reliever Bibens-Dirkx took over and gave up three doubles in a row, like he was John Burkett or something. He didn't get any outs, and was promptly removed in favor of Rafael Martin. Martin got three outs, one-two-three, like it was so easy.

What, more stuff? This box score is like a pile of jackstraws. Oh, whoa, how did this happen? It's the bottom of the ninth and Will Inman is pitching! With two outs, Seth Bynum hit a solo home run. Seth Bynum will never leave Syracuse. He probably never leaves the park. The team is going to have to change stadiums because he won't leave the premises. But here he homers, and it's all for naught because Pawtucket wins again. Congratulations, Chorye Spoone.

little cakes:
1. Will Middlebrooks loves batting with runners in scoring position. I mean, help me Rhonda, I have not seen the likes of these RBI in years. He is batting .467 with runners in scoring position. Rah, rah.
2. Mauro Gomez hit the first triple of the year for the PawSox! Looks like someone might be getting a card with a crisp ten-dollar bill inside!
3. Alex Hassan went 3-5 with two doubles.

And with that, the Pawtuckets are back in town! Even better, it's the annual Durham Bulls home stand! Doug Mathis will be opposed by Matt Torra, a righty. Game starts at six, I'll probably go even though I haven't slept since Alex Hassan got his first hit of the season.

I have something to show you later, too, but for now I gotta split.
Posted by Jenks at 6:19 AM