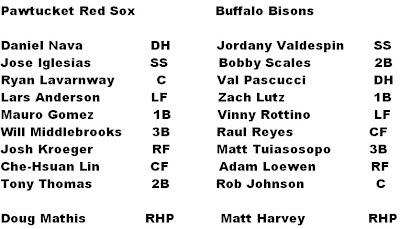 Buffalo WINS! 10-9 in ten innings. Bisons reliever/sex bomb Fernando Cabrera gets the win, which I suppose he deserves. But then, wouldn't I give him anything he wanted? But, yeah, with all the bad pitching and runs all day, this is gonna hurt like a motherfucker.

The first thing I noticed when I looked at the box score (aside from Daniel Nava DH'ing/batting leadoff again) was all the defensive changes and other switcheroos the Bisons made. That is not just a product of being the triple-A team for a National League franchise. That is wanting to win. I love it. And I'm not saying Pawtucket didn't want to win. I'm sure they did. It just wasn't a real priority for them. And I complain about the Buffalo Bisons a lot because Pawtucket seems to play them over and over, but I do love that about them. The way they work to win. It's refreshing at this level.

And now the hard part: Everything else.

Can I stall a little bit? The word 'Bisons' is not grammatically correct. The plural form of 'bison' is 'bison'. FACT. There are no buffalo in North America, only bison. FACT.

And now, the first inning. Nothing happened. Well, Daniel Nava walked and was caught stealing, but other than that. Oh, and Val Pascucci doubled. No runs scored, 0-0.

Second inning. Nothing happened. Well, Josh Kroeger tried to make it to second on a hit and it didn't work. And Buffalo loaded the bases. But no runs scored. 0-0.

Third inning. Nothing happened. At all. Six people came to bat and none got on base. Good time to get nachos.

Fourth inning. This is where Buffalo starter Matt Harvey looks at the clouds and wonders why. First off, he walks Jose Iglesias. Ah, the perfect spot to play the theme from Jaws!

Next in line, please: Mauro Gomez singles. We need to start a conversation about Gomez.

And then, Matt Harvey got two outs. And Tony Thomas was next so maybe the sun was peeking out a little. Thomas hit an RBI single, though, so the pain continued. 5-0. Do you think that Matt Harvey gets shaken easily? I think so. And this is only based on what I saw of him at McCoy Stadium. But I think he gets a little jelly-legged. At any rate, after Thomas' hit, Harvey threw a wild pitch. Thomas to third. Katy, bar the door.

Anticlimax: Thomas scored on a fielding error in center. 6-0. Harvey removed, reliever Bradley Holt takes a stand, gets final out after hitting Iglesias with a pitch. Ha ha ha. It's funny because it hurts.

Bottom of the fourth. Baby center fielder Raul Reyes leads off with a single off Pawtucket starter Doug Mathis. It's remarkable that I'm just now getting around to mentioning the starting pitcher. Mathis got the next batter out, but then he had to face right fielder Adam Loewen. In your mind he's this big blonde guy, right? A farm-bred Dutch hammer? FALSE! Loewen's a little Italian guy with eyes like mochaccino.

Not really. He's a big Viking. And here he hits a two-run homer. 6-2. The catcher in the nine-slot, Rob Johnson, followed with a single. Mathis got Jordany Valdespin out, but Bobby Scales singled off him. And even though there were two outs, Arnie Beyeler had seen enough. Mathis' pitch count was up to 91 anyway.

Will Inman. Entered with high hopes but walked the bases loaded, then walked in another run. 6-3. Vinny Rottino flies out to end the inning.

Pawtucket added a run in the fifth (RBI Josh Kroeger), then two more in the sixth (Gomez two-run double), but the real action happened in the bottom of the sixth. You remember Andrew Miller, right? And his pile of hair? Yeah, he ain't ready yet. Miller kicked things off in the sixth by walking Bobby Scales. Scales made it to second on a passed ball. Miller then walked Pascucci and Zach Lutz to load the bases for Vinny Rottino. A single from Rottino scored another Bisons run.

And now this is the cool part: Josh Satin came in to pinch hit for Reyes. Badass. Satin struck out, yes, but this was a big league move by manager Wally Backman. And by the way, how is it that Andrew Miller walked a bunch of dudes but managed to strike out Josh Satin? Satin must have been overzealous. Good job, Andrew Miller. Thanks for your hard work, but we're afraid we're going to have to let you go.

Next PawPitcher was Tony Pena. Um, Junior. Pena got Matt Tuiasosopo to strike out, which was a start, but Adam Loewen hit a grand slam. LOL Pawtucket.

You forget, though, that Pawtucket was still leading 9-8. And I've gone way past the point of anyone caring and deep into self-indulgence, but let me just finish this coffee and crackers before I do laundry.

Bottom of the eighth, Pena still pitching. Classic minor league stuff. Rottino and Satin hit back-to-back singles with one out. And Satin gets replaced by a pinch-runner. YES. A force out scores Rottino to tie the game.

I would suck at a marathon. I sprint early and run out of gas at the end. Also, I'm a fatass.

alrighty:
1. Mauro Gomez went 3-4 with two doubles. Daniel Nava went 0-5. Lavarnway did not get a hit, but at least he got on base.
2. Vinny Rottino, Adam Loewen, and Rob Johnson each got three hits. Loewen's six-RBI game made him a Name Player in the game summary here.
3. Cool story, Dave Ricci. "I'm so far removed from pitching that hitting feels natural to me now," Loewen said.
4. "So when do we start worrying about Matt Harvey? In 3.2 innings Harvey got shelled for six runs (five earned) on six hits and three walks against two strikeouts. He is sporting a 7.52 ERA/. Hopefully he is just putting pressure on himself in his first taste of AAA, and it is only his second pro season." - The Real Dirty
5. Petey Pete Shapiro of Mets Merized does a great game summary. And the accompanying picture cracked me up for some reason.

Tonight! Syracuse and Ohlendorf, Tanner Roark and apple pie. Thanks for this.
Posted by Jenks at 12:14 PM