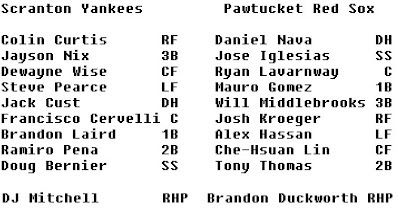 Red Sox starter was not Alex Wilson and his badonkadonk. It was Brandon Duckworth, being all cool and getting the ball. Duckworth pitched four innings, giving up two runs on four hits. Yankees first baseman Brandon Laird hit a two-run homer in the second to give Duckworth the bends.

DJ Mitchell was on the turntables for Scranton, going six innings and giving up all the runs and taking the loss home like a sack of concrete. Was it the home runs? Mostly. Daniel Nava hit a solo home run and Mauro Gomez hit a two-run shot to left, all in the fourth inning. Gomez also struck out three times, so there you have it. Righty power hitter 1B/DH who strikes out too much. Total beisbol archetype.

Hey, isn't there one Pawtucket run unaccounted for? Yes. After Gomez did his thing that he does so well, Middlebrooks singled and Josh Kroeger hit an RBI double. I didn't forget you, Josh.

And the pitchers? After Duckworth, Clayton Mortensen pitched a couple of innings. Then Alex Wilson, giving up the third Scranton Wilkes-Barre run. And Rich Hill pitched a scoreless eighth. Melancon pitched the ninth and got the save. Thank you, boys!

the last good times of daniel nava:
1. Here's Donnie Collins, not doing a game blog but instead talking about Red Barons v Yankees as far as the fan experience at the park. It's a great story. This is my recommended reading of the day.
2. Jack Cust? Dewayne Wise? Jayson Nix? Wow!
3. Clayton Mortnesen hit a couple of Yankees (good boy) and struck out three. Have you seen his neck? Tyra would encourage him to work his neck in photos and maybe call him a Giraffe of Fierceness. And Aaron Goldsmith pronounces his name like he's a Speak n' Spell. "Say it... Clayton Mortensen."
4. "Mark Melancon got the save in this one. Good to see him in a non-meltdown situation" - Bronx Baseball Daily
5. PawSox Blog, if you can handle it. I notice he typed 'Moretnsen'. Ordinarily, I would rip on that misspelling, but god damn it, I can't type his name to save my life. I should have left in all my Mortensen typos.
6. SoxProspects.com feature comment from the forum: "Watched his last at bat and he definitely look like he was forcing the pitcher come to him. He took 2 well placed strikes and 3 of the balls were very close. 2 of the balls and 1 of the strikes were decent curveballs on the outside corner, though he did check swing at the 2 balls. Mauro Gomez in the at bat right before Middlebrooks looked silly hacking at 3 straight curveballs. " (AlfMendolson)