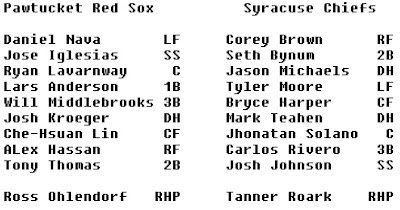 Red Sox win, 4-3, in a game straight out of 2011. Starter Ross Ohlendorf gets the win. Fresh, young callup Tanner Roark gets slapped with the L.

Ohlendorf pitched six innings and gave up three runs on five hits. Not so glamorous, but the team won which is all that matters! (It doesn't matter.) The meat of the sandwich, Garrett Mock and Andrew Miller, kept the Chiefs scoreless. Miller's inning was a three-strikeout affair, so he could be improving. Or it could be a fluke. And Garrett Mock is not the rickety scaffolding I thought he'd be.

Starter for Syracuse, Tanner Roark, probably wanted to pitch six innings and thought he could do it, but he couldn't. Instead, he pitched 5 1/3. In the third inning, Tony Thomas hit the first pitch he saw for a home run. This is a song about a superhero named Tony!!! I am thrilled to welcome Thomas back, and this all reminds me of last year when Thomas cranked out a couple of April grannies. 1-0 Pawtucket!

In the fifth inning, Alex Hassan singled with two outs. Thomas was the next batter. And they like, kept trying to pick off Hassan. Thomas hung in, and on a 3-1 count he homered to center! And that's when I ran out onto the field and carried him around the bases on my shoulders! 3-0 Red Sox.

Catcher Ryan Lavarnway led off the sixth inning with a home run. It wasn't quite then end for Roark, although I'm sure someone was warming. No, they waited until a couple more runners were on until they brought out reliever and volcano god Atahualpa Severino. Severino stranded the runners, so gold star for him.

Syracuse started getting to Ohlendorf in the seventh inning, when center fielder Bryce Harper led the inning off with a double. I'm sure the Chiefs fans went apeshit. Designated hitter Mark Teahen followed with a single to left, scoring Harper. Teahen advanced to second when Ohlendorf hit catcher Jhonatan Solano with a pitch. Are you nervous? You should be. There's no one out.

Have you ever heard of Carlos Rivero? No? He plays third base for the Chiefs and is cool enough to sac bunt in this situation. But Ohlendorf made a throwing error and Rivero made it to first to load up the bases, still no one out.

Wait, it gets worse. I can't even blame stuff on Theo anymore. Shortstop Josh Johnson hit an infield grounder or whatever, and Lars Anderson made a throwing error and another run scored. Still no one out! Arnie Beyeler came out to execute a pitching change. Garrett Mock came out, and he was a total Chiefs guy in 2011. I wondered if anyone noticed?

Syracuse right fielder Corey Brown was the first to face Mock, and he swung at the first couple of pitches, but connected on the third for a single, scoring Solano. Uh-oh, 4-3! But then Mock adjusted his cup and struck out the next three batters swinging.

Andrew Miller handled the eighth inning, and fiery redhead Junichi Tazawa picked up the save for Pawtucket, the first save he's ever gotten in his whole life probably. Chiefs relievers Rafael Martin and Ryan Perry deserve a mention, too, for their combined ass-kicking run prevention and just for generally smelling delicious.

on my bicycle like a pony:
1. Josh Kroeger went 2-4 with a double. I have no idea what he looks like.
2. Alex Hassan struck out three times. For Syracuse, Seth Bynum struck out three times. In a related story, exactly how long is Bynum going to be on the Chiefs? Dude, get your own apartment.
3. From Tom Leo's story: "It was a little different,’’ said Mock, who signed with the Boston Red Sox organization as a minor-league free agent this winter. “I played a lot with all the guys I faced tonight. It was definitely a first for me.’’
4. "All three Syracuse runs came in the bottom of the seventh, the last coming when ex-Nat Garrett Mock let in one inherited run (SSDU) then struck out the side (WTF)." - HA! SSDU! That is genius and I have to steal it. (from NationalsProspects.com)
5. Lars Anderson and Chiefs' left fielder Tyler Moore should definitely hang out. Moore played left field for the first time in this game. He's usually a first baseman.
6. I do not know who Chris McCarthy is, but he's covering the Pawtucket Red Sox on internet radio. So check him out and see what the heck is going on and then report back to me.

TONIGHT!! Justin Germano and Yunesky Maya in Syracuse. Must be beautiful in New York right now.