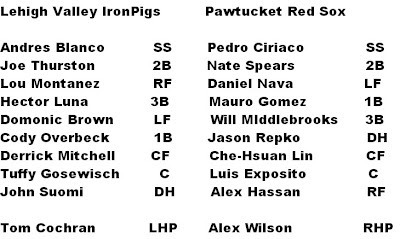 Starting pitcher for Pawtucket was Alex Wilson, who is not fat at all. Wilson did reasonably well, going five innings and giving up one run on three hits. If strikeouts turn you on, Wilson racked up seven. He's a freak like that. Oh, yes.

Wilson's good, good work was undone by Chorye Spoone, who might be fat. Spoone got one out in the sixth, then walked the next two batters. A passed ball advanced the runners with slugger Hector Luna at bat. However, Luna struck out.

But, wait! Here comes Domonic Brown, Phillies fans! You know you love him. Brown was THE guy, singling to center and getting those two runs over. Spoone blew the save and took the loss. Happens to the best of us. Get over it. People puke and they poop their pants.

What about Tom Cochran, The Steady and Earnest? If Tom was a highway, I'd want to ride him all night long. Five innings, two runs. First baseman Mauro Gomez hit a solo home run in the second inning, then Daniel Nava hit an RBI single in the third. And then Jeremy Horst pitched and then Philippe Aumont pitched and the game was over. Aumont's seventh inning close-job was sloppy - He hit Ciriaco with a pitch and then walked Nate Spears and Daniel Nava. But Gomez grounded into a double play to end everything.

jason repko went 2-3:
1. Jason Repko went 2-3.
2. Hector Luna struck out three times, which is not the Luna I remember.
3. This one time Joe Thurston was an a-all-star on the PawSox.
4. By the way, Bosox Banter wants you to meet the PawSox. How do you know I'm not close, personal friends with Ross Ohlendorf?

Tonight! Pawtucket's Doug Mathis v IronPigs Scott Elarton. I was going to go, but I am doing a favor for my boss. I owe him, he's letting me take time out to go see the Nationals this week.

Hope you had a heavenly Easter.
Posted by Jenks at 11:45 AM