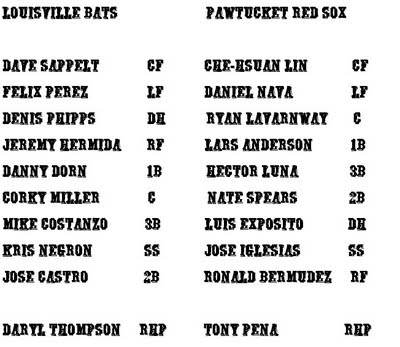 Louisville Bats win, Pawtucket deserved to lose. The Bats got 17 hits. Dave Chappelle got four hits. Mike Costanzo got three. Final score 7-2, although it could have been, maybe should have been worse. Louisville left 11 runners on base and the clutchiest Bats that ever clutched were Dave Sappelt (CF), Corky Miller (AA), and Jeremy Hermida (VD). All those guys came up with two outs and batted someone in.

I am going to attempt to untangle all the numbers. Tony Pena got the start for the Red Sox, went five innings and gave up four runs on nine hits, including a home run by Jose Castro that happened only in Pena's paranoid little mind.

Starting for Louisville was Daryl Thompson, a righty and a model train enthusiast. Thompson was damn good, getting into the seventh inning with 105 pitches, only giving up the one run. Thompson struck out Spears, Iglesias (twice), Bermudez, Anderson, Lin, and Exposito. YEAH!

Pawtucket scored their first run in the first inning, when Che-Hsuan Lin led off with a walk, stole second, advanced to third on a balk, scooted over to fourth on a passed ball, and got to fifth on a wild pitch. And then Lavarnway batted Lin over for the 1-0 lead.

The second run? How much time do you have, because it came much later in the eighth inning. Lavarnway doubled, stole third, and then told Hector Luna to go ahead and hit a lame-ass infield single, just to prove he could score on that shit.

Pena's relief corps consisted of Santeliz, Ring, and Rice. The Bats gave us Vandy stud Nick Christiani and Jeremy Horst, who is not a stud of any sort.

you eat all that dog food yourself?
1. It was Ryan Lavarnway's first PawSox stolen base. And only his third, professionally. Christiani must have no game at all and Corky Miller must have been half asleep.
2. Brendan McGair gets into Lavarnway's steal a little bit more.
3. Because the Providence paper cannot write about Lars Anderson without including some Chili Davis quotes about his hitting progress... Here you go. Shit happens, Anderson.
4. DAVE SAPPELT EXCLUSIVE SEX TAPE!!! Minus sex and probably also minus tape.

TONIGHT! More Louisville Bats and more Danny Dorn. And if you're intrigued by the mysterious Edinson Volquez, well, tonight is your night. Kyle Weiland will oppose. Should be a good crowd, with one exception.

Chili Davis, what do you think of that?
Posted by Jenks at 7:06 AM