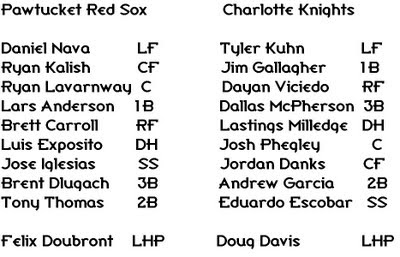 Red Sox take this one 3-2. Doug Davis will get you next time.

Pawtucket starting pitcher was Felix Doubront, easing into pitching again like a bubbling hot tub. Doubront worked for 2 2/3 innings, giving up a hit, a walk, and no runs. He threw 42 pitches and struck out three. Just a quickie last night for Doubront.

Charlotte Knights starter last night was the world famous Doug Davis. Davis could quite possibly have pitched a great game, but the first inning was rough and he gave up those three Pawtucket runs.

See, what had happened was Ryan Kalish returned to the lineup. Kalish's first at-bat featured a line drive to center for a double with one out. I'll bet that felt great. Doug Davis then walked Lavarnway and Anderson to load the bases for Brett Carroll. Wait, Brett Carroll's still around? I thought that was a practical joke!

Carroll hit a fly ball to center, allowing Kalish to score. Next up was Luis Exposito, who hit a single, scoring Lavarnway. Jose Iglesias, the lightest hitter this side of the Pecos, hit a single of his own right after that. Anderson scored! 3-0 Pawtucket.

Oh, hey, look, it's the bottom of the fourth! How did Tommy Hottovy get out there? And did he just give up a leadoff double to Dayan Viciedo? YES. And then Josh Phegley batted Viciedo in to bring the score to 3-1.

The Knights scored again in the seventh inning. Handsome Randy Williams got tagged for a run when he hit catcher Josh Phegley with a pitch, which generated a run when second baseman Andrew Garcia doubled. Uh-oh, 3-2... Was Charlotte coming back to kill us all?

No, because Williams pulled it together and got some outs, leaving his high score and extra lives to Michael Bowden. Bowden put a bow on it for the PawSox and the 4,000 fans in attendance (Or, realistically, the 3,000) trudged home with heavy hearts. They really care about the White Sox down in the Carolinas.

presser:
1. Ryan Kalish also struck out twice. Tony Thomas went hitless and struck out three times. Iglesias got two hits.
2. Guess who got the win? Tommy Hottovy.
3. I have limited resources for game notes. I mean, you can read this, but you may as well read a box score. I mean, don't they have someone at the paper that can cover Charlotte Knights games?
4. Not really anyone blogging White Sox minors, either?
5. Felix Doubront added, Royce Ring to the DL. Jeremy Kehrt's back with Portland, but still on the DL. Ronald Bermudez is also in Portland.
6. Did we talk about the release of Clevelan Santeliz? He's gone.
7. Oh, here's something! Peter St Onge talks about the Knights getting money to build a downtown ballpark and how risky it is.
8. Kristin Horne admires Lavarnway's work in Charlotte.
9. Lindsey Roycraft is the Knights PR person. Her job is evidently a challenge every day.
10. More stuff about a potential new park for the Charlotte Knights. According to this person, the Greenville Drive draws more fans than the Knights. BELIEVE IT.

TONIGHT. Gwinnett Braves. Julio Teheran! Tony Pena will be over there, trying to solve that thing. Meantime, let's go to work!
Posted by Jenks at 7:04 AM