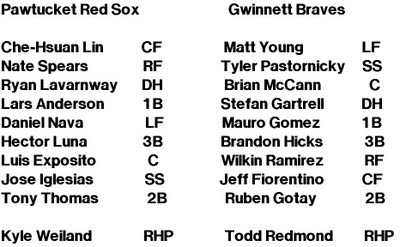 The Gwinnett Braves assaulted Weiland's balls with their bats, resulting in four runs, including a homer by (who else?) Brian McCann. McCann's all done with his rehab, thank you very much.

Todd Redmond, no relation to Mike except it's his brother, started for the Gwinnett Braves and had a little more success. Redmond pitched seven innings, and only gave up one run. He threw 100 pitches. When will someone from Pawtucket have a start like that? I realize it's all some diabolical plan that comes from the organization, but what about me? I want to see a for real start! I want Felix Doubront to pitch 8 innings! 105 pitches! That'll fix him!

The Red Sox scored their first puny run in the second inning, when Luis Exposito grounded out with a runner on third. Exposito rubbed some sticks together in the ninth, too, and hit an RBI single. Iglesias popped up after that with a couple of runners on, but no dice. Iglesias grounded out like a little baby.

And what about Junichi Tazawa? He jumped into the game in the sixth inning, got some work in, threw 46 pitches. Randy Williams also chalked up one out, a big K in the eighth. Jeff Fiorentino cannot handle that kind of truth!

One thing about Randy Williams. Before games at McCoy Stadium, the scoreboard blasts the rules and regs as read by the players. Most of them come off barely literate, but Williams has PIZAZZ! CRACKLE AND POP! Guys as sharp as him are something rare. Someone give Randy W. A walk-on part in a soap opera, like some of those guys from... The Pirates? Oakland? Was it the Cardinals?

It was the Brewers. I just looked it up.

Cory Gearrin got the save for the Braves. Gearrin then started a wave before he shaved.

keep them just the same:
1. Al Daniel breaks it down Rhody-style.
2. Todd Redmond is not Mike Redmond's brother. He is, in fact, his father. Did you know he threw a no-hitter?
3. Ben Beitzel of the Georgia Beitzels paints a perfect picture and brings 2 life a vision in one's mind. Also, is pitching coach Marty Reed calling Todd Redmond a fatass?