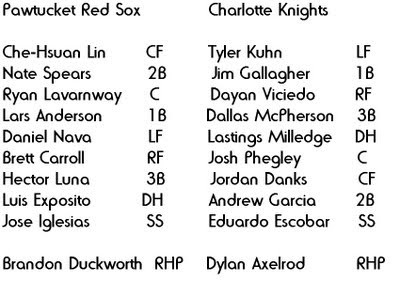 Starting pitcher for the Red Sox was Brandon Duckworth. Duckworth pitched 6 2/3 innings, as usual. He gave up five runs on seven hits, including two home runs by freaking Dallas McPherson. I'd say Duckworth has had better days.

Dylan Axelrod put it down for FMSC, working.... Well, laboring for five innings and giving up four runs on eight hits. Axelrod struck out five and walked three.

Axelrod's first inning was pretty sloppy. Che-Hsuan Lin led off with a single. A double by Nate Spears allowed Lin to take third and set everything up for Ryan Lavarnway, who flew out to left so Lin could score. Lars Anderson did Lavarnway one better and singled to right, scoring Spears.

Axelrod then walked Nava and Carroll to load the bases, but he struck out Hector Luna and Brett Carroll to escape. But Pawtucket was up 2-0, so the Knights... They probably didn't really care that much.

Charlotte tied the game up in the fourth inning when Dallas McPherson hit a two-run homer. McPherson is not as old as you think he is, although it seems like he was on the Angels a rather long time ago. The Red Sox pulled ahead again by a run when Anderson hit an RBI single in the fifth.

Bottom of the fifth, Duckworth was ruffled again. Shorty Eduardo Escobar led off with a triple, which was at once majestic and irritating. Duckworth assessed the situation, took a few signs and... Wild pitch! Escobar scores!

And that wasn't even the worst part of the inning. After first baseman Jim Gallagher grounded into a force out, Dallas McPherson hit his second HR of the night, making the score 5-3. Okay, the Red Sox had work to do.

Sixth inning, still Axelrod. Axelrod put a couple of runners on without getting an out, so he was replaced by reliever Addison Reed. Reed is a young prospect in the White Sox org. He got Jose Iglesias to fly out to right and catcher Josh Phegley caught Exposito stealing. All anyone can really say is 'D'oh!'

And then it looks like Reed walked Lin with a wild pitch, scoring Hector Luna. 5-4!

Duckworth pitched a tidy sixth and Pawtucket scored their tying run in the seventh on a solo home run by Daniel Nava.

Okay, here's the Royce Ring part: Ring gave up three runs in the bottom of the eighth. There were a couple of singles, a bunt, a double, a home run, and then a pickoff to end the inning. Not at all in that order, but I don't want to keep you here all day.

Charlotte reliever Josh Kinney pitched the last couple of innings and got the win. Cool, I used to be a big fan of his affordable footwear.

two things:
1. Nate Spears went 3-5 with two doubles. He's got a grudge against Axelrod. The last game Axelrod pitched against Pawtucket, Spears was ejected. FACT.
2. Brett Carroll and Jose Iglesias got zero hits.
3. From Angels blog 'True Grich', we see how much Dallas McPherson resembles Joaquin Phoenix.
4. Addison Reed scouting report. (not a sentence)
5. "A wild pich", "came in to run for Millegde", "Dallas McPhearson". I certainly expect better.
6. A look at Addison Reed's repertoire here. Good stuff, Corey Ettinger, but you forgot to mention Reed's serious asshole face.
7. Addison Reed has a less successful brother in the Cubs org. Ah, that old story.
8. Addison Reed was Stephen Strasburg's closer! AZTECS!!!
9. Knights catcher Josh Phegley has ITP, which is like really bad for your platelets.
10. This story only briefly mentions Josh Phegley, but it's got this kickass headline: "AJ Pierzynski wants to play 162, he should not".
11. Dallas McPherson is going to be inducted into the Citadel Athletic Hall of Fame. Wow.