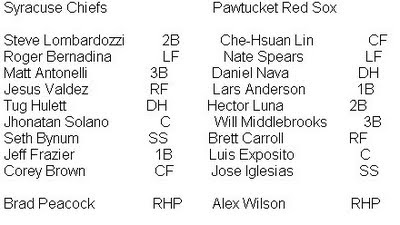 Starting P for the Red Sox was Alex Wilson, who has a super juicy ass and probably needs it to throw as hard as he does. Wilson dogged it out for four entire innings, giving up two runs on five hits. Not bad? He walked four dudes and his pitch count was up to 86. I was there, I don't know. I'm far from a scout so all I can say is that he looked weird. He is graceless.

The Syracuse chiefs gave us Brad Peacock, who pitched five and got the win. Know who else pitched for the Chiefs? Garrett Mock, still hanging on. And Atuhualpa Severino (not an actual Hawaiian.) And Josh Wilkie!

The game was tied at two, a score achieved through a series of wild pitches and walks and errors and base stealing. One of those classic triple-A slop games I've seen way too often. Jason Rice kept the fifth inning scoreless, but in the sixth the Chiefs nickle-and-dimed him for a couple of runs. Former PawSox roster stuffing Tug Hulett drove in one run, and a wild pitch by Rice allowed a second run to score.

Pawtucket probably could have won this game, but the defense was the team's downfall, excepting tiny dancer Jose Iglesias. Lars Anderson had some opportunities to make good plays, but Middlebrooks is not Hector Luna at third, nohow. Middlebrooks' throws to first need a little work. And Luna? He played second like the pro that he is. I'll bet he couldn't help but think, I would have gotten that runner. I would have nailed it. Anderson would have had that guy.

Handsome Randy Williams is back with Pawtucket. He pitched two innings last night, all scoreless and clean, with three K's. His fluidity and poise on the mound was like a counterpoint to the brutish throws of Alex Wilson. And also, he is handsome.

After the game there was a laser show. I stayed and watched it. What? I also participate in the wave sometimes. How many times have I told you that I'm keeping it real?

CL:
1. Since I almost always ride the first base line, I should be an expert on fielding that position. How many times did I see Jeff Bailey set, pivot, receive? Was he better than Aaron Bates? I never saw many problems over there, but then you had guys like Angel Chavez (number one greatest third baseman I've seen at McCoy), Gil Velazquez (also good), Keith Ginter... No, not Ginter. My point is that Anderson had some bad luck at first last night, which sufficiently rankled him into a desperate, sprawling layout in late innings, gut down in the dirt and ball-holding arm stretched to its limit onto the base. Who was the runner? I cannot remember.
2. But my point is this: These are Anderson's last days with Pawtucket. He is going to turn into Aaron Bates and there's nothing he can do about it.
3. "Fans at McCoy Stadium just got to see why Daniel Nava and Lars Anderson are expected to make an impact for Boston in the future." They are? When did this happen? Daniel Nava? REALLY? Information courtesy of a live blog of the game, written by one Patrick McHugh. Hey, McHugh: It's JHONATAN Solano. And thanks to the sporty mega-corporation who put this out there for horning in on my racket.
4. Oh, yeah, the Red Sox left the bases loaded in the bottom of the ninth. With no outs, they loaded them. And then came the bottom of the order.
5. Syracusey summary with video.
6. Everyone's favorite B-Mac tells you all about it.
7. The other B-Mac, the Up-and-Comer, does his thing all over Chili Davis' FAYCE! This season's feature stories deserve recognition, really. Some fresh stuff for that crazy little Pawtucket paper. All you, McGair.
8. Scouting report on Brad Peacock: "With a quick, loose arm action, he throws a 92 to 94 MPH straight fastball, a plus knuckle-curve ball with sharp downward action, and an average changeup. As the 2010 season progressed, his velocity climbed; when pitching out of the bullpen in the Arizona Fall League, he was hitting 96 MPH consistently. Possesses the arm strength and stuff and talent to become a mid-rotation starter. Fields position fairly well and has average athletic ability.Worst case scenario, power bullpen arm."

After being away for a while, I had to come back to a game like this? I had fun at the park, regardless. But since my computer had to undergo minor changes, I'm working with a handicap. My favorite stuff's all gone, I can't make good lineups, the blog search engine I usually use es jodido, everything's different, and I'm sick! Sick! Who gets sick in August? And why don't I ever get hate mail? I would love to get hate mail!

On the plus side, I'm an emerging force in grass-roots sports media. You have no idea how excited I am.

Look at that lineup. Just breaks my heart. I need an alternative program to make those blasted things.