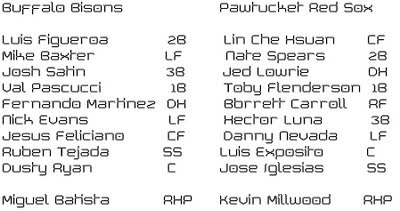 Pawtucket won, 6-5. I came perilously close to skipping this game, as I got BLOWN OFF, but I ate a burrito and calmed down.

Starting pitcher for Pawtucket was Kevin Millwood, who's making all kinds of new friends in Rhode Island. Also, I recommend looking at Millwood's various salaries over the years and see how bad you feel for him. Hey, Kev, I live in a dying, bankrupt city in a sweltering tenement. What can you do for me?

Millwood had a thorny first inning, getting stung for two runs by Val Pascucci's two-run homer. What can you do, it's Pascucci. He's like Mike Hessman! Millwood cruised through 2-4, gave up a couple of singles in the fifth, and then another pair of runs in the sixth to tie the game, 4-4.

However, Pascucci was not the only first baseman to hit a home run in the first inning. Miguel Batista of the Virginia Batistas started for Buffalo, and Anderson got him for a solo shot. Add that to Che-Hsuan Lin getting ground-balled home after a double and you see the two runs, there.

The Red Sox scored a third run in the second inning thanks to a hit, a walk, and a couple of errors. In the third, Nate Spears led off with a walk, scooted over to third on a couple of groundouts, and scored when Brett Carroll hit an infield single. 4-2 Pawtucket!

Things went curiously awry when Hideki Okajima entered the game to relieve Millwood. I mean, it was cute and everything at first as Okajima got everyone to fly out in the seventh, but shit got real in the eighth. Okajima walked third baseman Josh Satin with one out. Okay. And then, ugh, beloved outfielder (DH this night) Fernando Martinez doubled to right, where the new kid was playing. And for the second time, Brett Carroll looked like Chris Carter out there, just completely in the wrong spot and chasing after the ball like a dope. Satin scores! 5-4 Bisons! Brett Carroll ruins Christmas!

Pawtucket had opportunities prior to the ninth inning: Two on for Carroll in the fifth, but he grounded out. Gustavo Chacin walking half the park in the seventh, but weak deliveries by Anderson and Carroll. Enter Dale Thayer to close the game out for Buffalo. Che-Hsuan led off the ninth with a single. Oh, wow! Cool! I love it when hope is sustained and not extinguished! Thayer got Nate Spears to strike out and then it was Jed Lowrie, who is not at all interesting or fat. Lowrie had not gotten a hit all night and I had him pegged for the second out, but Lowrie hit a single. Not that he cares. In many ways, Lowrie has never left Pawtucket. They named an omelet after him at the diner!

With two on and one out, Lin at third ready to race race race home, Anderson approached the bench. Thayer K's Anderson! AAUGH!

And so your Pawtucket Red Sox Last Chance was Brett Carroll and his plummeting stock. Carroll singled to right, though, scoring Lin AND Lowrie... Well, Tony Thomas, who pinch ran for Lowrie because he's strong and fast and Lowrie's fragile like silken kimono. You should have seen Thomas run! He looked like a football player heading for end zone glory! Brett Carroll was duly assaulted in the head area and Hyder couldn't wait to get his hands on him. I was so happy. All is forgiven, Brett Carroll. FOR NOW. Today you get to be the happiest girl in the whole USA.

the patching of Lin's uniform pants was the greatest baseball tailoring hack job I have ever seen:
1. Miguel Batista? Kevin Millwood? Gustavo Chacin? Dale Thayer? That is some pedigreed pitching right there.
2. Chili Davis was not immediately available for comment after Lars Anderson's home run.
3. Daniel Nava got a couple of hits, too. Nava's not exactly a thrill at the plate, but at least he doesn't make an ass of himself in left.
4. Millwood gave up a couple of singles in the fifth, but the infield turned a tight little 4-6-3 to snuff that out. It was a very well executed DP. Uh huh huh huh. Heh heh, hmm. Yeah.
5. Jason Rice also pitched. Tony Pena flipped off Kyle Weiland in the stands. Like a brother! Don't you flip off your brothers? I know I do. My sisters, too.
6. And your mom.
7. Spears, Iglesias, Carroll and Lin each stole a base. WHAT NOW, DUSTY RYAN?
8. Brett Carroll was DFA'd by the Brewers, opted to be a FA, and was scooped up by Boston. Yes, I do know what DFA means. And I know what a FA is. 'DTAMFS' I am still struggling with.
9. I had never heard of Josh Satin until recently, but he's been a beast with Buffalo. He's been a Bison. He fought in a war and left his friends behind him.
10. Drew Sutton is on the DL. Dlugach is not on the DL as far as I can tell, but he is not playing. If you dressed Dlugach in drag, I think he'd be a fairly attractive lady. You really can't say that about a lot of PawSox players.
11. So what's going to happen with Bermudez?