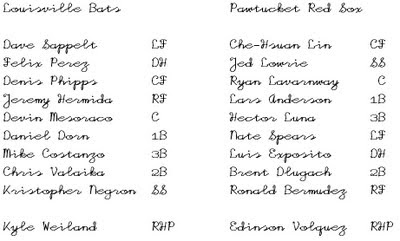 Jordan Smith, oh, no. Pawtucket WINS! 4-3, just when you thought it was over.

Kyle Weiland gave up two home runs, just to get that out of the way. There is no way around it, the kid gave up two home runs. Daniel Dorn, who I swear used to be 'Danny' Dorn, hit one of them. Chris Valaika the other. Weiland used less than 100 pitches during his seven innings, giving up three runs on seven hits. Five strikeouts! One walk! Not bad.

The incredible, edible Edinson Volquez shoulda had this in the bag for Louisville, but Jordan Smith crapped all over his decent start. Volquez gave up two runs in seven innings, both of them solo home runs (Exposito, Luna). He struck out six PawSox schmucks, too. Volquez was heading for a win, although I'm sure he knew the risks of keeping it. It's triple-A, after all.

The Bats were ahead 3-2 going into the bottom of the ninth. Jordan Smith was in trying to get the save. Nate Spears led off with a single, advanced to second on a groundout. And then Dlugach popped out, so it was looking pretty good. Next up was Bermudez, but Nava was pinch hitting. He's a switch hitter and Bermudez is a righty and Jordan Smith is a righty, but you knew that. And Daniel Nava walked.

Jordan Smith, big kid from Utah who's made it to the big leagues, lover of animals, friend to the aliens, trying to get the last out hit Che-Hsuan Lin with a pitch. I have to laugh a little about that. You just have to cringe for everyone involved. Bases loaded for Tony Thomas! No, it was in fact Jose Iglesias, who entered the game after Jed Lowrie had put in his hard three innings.

Jordan Smith walked Iglesias, bringing Nate Spears across to tie the game. And then he walked Lavarnway to walk in the winning run. What the hell happened out there? One of the least exciting ways to win a game, that's what I say.

Reliever Michael Bowden got the win. One of these days I am going to sit down and talk about Bowden, but that day is not today.

down by the riverside:
1. Tommy Hottovy also pitched.
2. Outside of the lefty/righty thing, is Bermudez so different from Nava? Just think about that for a minute. I'll wait.
3. Jed Lowrie is rehabbing in Pawtucket. Again. Like, the minute he walks into the door at the donut shop in Pawtucket they say, "Oh, hi. Large regular, right?"
4. Jed Lowrie is so unbearably boring. I can't believe he is still hanging around. Just get rid of him, seriously.
5. HA! Attleboro's Peter Gobis titled his game story "Lowrie no stranger in Pawtucket".
6. CF Denis Phipps went 3-4. People love his arm, too. Phipps is a very recent call-up and there's so much buzz.

This afternoon! All my plans are ruined! I didn't know it was a day game so I organized an outing that went up in smoke because people have to, like, work and stuff. But Scott Carroll's pitching for Louisville and Matt Fox for Pawtucket so if you can sneak out... Don't. Yesterday's matchup was much more interesting.