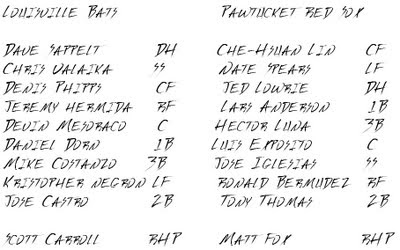 Jason Rice WINS! 4-3 in a day game that did not feature Brent Dlugach, who's been in and out of the lineup. Dlugach could be dead for all I know.

Matt Fox got the start for Pawtucket. He pitched however many innings a guy like Fox pitches in triple-A. He struck out nine batters, which has to be a season high for him. Jeremy Hermida wasn't having it, though, and hit two home runs off him. Hermida was on the PawSox last year but if there wasn't internet evidence of it I would say, No way. I'm sure I would remember Jeremy Hermida on the PawSox.

Righty Scott Carroll got the start for the Louisville Bats. When he faced Jed Lowrie in the first inning, Lowrie singled to right. And then Anderson hit a home run, so Pawtucket was up 2-0 before people could even think about their second beer. Hermida's homers tied the game up 2-2 until the ninth inning, when Mike Costanzo hit a sac fly to score catcher Devin Mesoraco. Hideki Okajima was the recipient of that run, not that he cared much.

Could it be curtains for the Red Sox? Carlos Fisher came in to close the game, got a couple of outs but walked Lin. And then Nate Spears got the devil in him. Spears hit a two-run homer and crammed a win down everyone's throats. Game over, thanks.

in my dreams you are alive and breathing:
1. Kinda sucks for Hermida that he hit two home runs with nothing to show for it except impressive biceps and a tanned, athletic physique. Does he still have that stupid beard?
2. I looked it up: Hermida certainly struck out a lot with Pawtucket!
3. Scott Atchison also pitched and Jason Rice got the win.
4. Three stolen bases for Pawtucket! WHAT NOW DEVIN MESORACO?!
5. Three double plays for Pawtucket! Jose Iglesias, you charming imp!
6. Ryan Lavarnway entered the game in the seventh inning. Lavarnway's cooling like pie on a windowsill.
7. Nate Spears said a nice thing about his teammate: "That was a great at-bat by Lin, if he doesn't do that, I don't have the opportunity," said Spears of his eighth home run of the season." (Attleboro man Peter Gobis)
8. Should Hermida return to the majors? 'Scouting the Sally' blog's Mike Newman wants to tell you all about it.
9. I linked to this JT gent before. Here on 'The Writer's Journey' he speaks briefly of Hermida.
10. JT's bio reads: "Music lover, occasional writer, wishing he had immeasurable wealth so he didn't have to work a "real job." Holy crap, this guy is my male counterpart!
11. Hermida pops up in some story headlined "Bats Clip Red Wings In Series Finale". IF I EVER START CRANKING OUT LAME, BIG MEDIA BULLSHIT HEADLINES LIKE THAT JUST SHOOT ME ALREADY. I fucking hate that crap. Can we all agree that those stupid sports puns are tired, tired, tired? Why can't everyone collectively agree to make this stuff go away? DONNIE COLLINS I KNOW YOU HEAR ME!!!
12. And finally, forum member 'Bates1343' had this to say in a post titled 'Digging up old players to fill roster spots':

Pawtucket and Portland cant keep up this pace of having a light bench. Besides Jed coming in on rehab, who else is going to fill these roster spots? What will it take for the Reds to hand Jorge Jimenez over for the rest of the year. They stuck him at High-A when we had him in AAA. Jeff Corsaletti was always a great hitter, but I hear he retired. Jeff Natale was a great defensive infielder. Iggy Suarez anyone? Have a good night

I only included this because I laughed and laughed when I read it.

Tonight! Pawtucket Red Sox get krunk because there is no game. Or, more likely, they got wasted LAST night because they knew they could sleep late today. I'll bet they went DOWNTOWN, probably to some lame, vacuous dress code club that plays bad, endless house music. I'll bet Nate Spears hangs out in the VIP section, because you know that guy totally would.