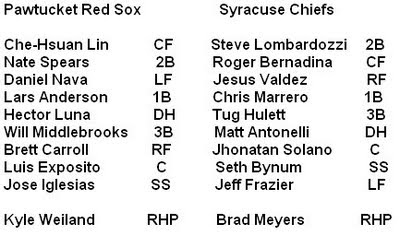 Pawtucket ties it, then pulls ahead, then drops bricks on Syracuse. 12-4 the final and can I tell you how much I hate the Yankees? I hate you, The Yankees. I hope Ortiz puts a hurt on their pitching staff next week. Did you read that story? It's so good.

Starting pitcher for Pawtucket was Kyle Weiland, who gave up four singles and hit CF Roger Bernadina in the first inning to give the Chiefs the 2-0 lead. Weiland gave up six hits altogether and walked three. He was up to 98 pitches after six innings so he left the game to eat sandwiches and take a nap.

Lefty Father of the Year Felix Doubront pitched innings seven and eight and the Chiefs scrounged up a hit but nothing more. Syracuse had better luck with Michael Bowden, most notably when Roger Bernadina hit a two-run homer in the ninth, but by that time Pawtucket had a fat, fat lead. Bernadina's lucky there's no stat for Futile Home Runs.

Chiefs starter Brad Meyers also pitched six innings and gave up two runs. His work was undone by the relief corps, save Zechry Zinicola who managed to get the last Pawtucket out.

Hmm, okay, Pawtucket scoring. Let adjust my glasses and pull out this haphazard sheaf of papers from my university desk and shuffle through it. Third inning, Luis Exposito and Jose Iglesias hit back-to-back singles to lead it off. Both later scored. 2-2.

The game remained tied until the bottom of the eighth inning. Skinny reliever Ryan Tatusko still working after keeping the Red Sox scoreless in the seventh. Che-Hsuan Lin nabbed Tatusko for a single and then came the call to the pen. Lee Hyde came rollin' in. Don't try to understand him. Hyde walked Nate Spears. Daniel Nava bunted those dudes over, which was nice. Hyde struck out Anderson and walked away.

New reliever in the eighth: Jeff Mandel. And here comes Hector Luna. Ha! Luna hit a two-run single, is all. La fiebre de Luna! Will Middlebrooks followed up with a single, but Mandel got Carroll to strike out to end the inning. 4-2 Pawtucket.

NINTH INNING. Pawtucket leads with single, single, sac bunt. Adorable. Mandel gets booted in favor of Atahualpa Severino. I'm not sure Severino had any idea what was coming next. Maybe he did.

That's it, I'm afraid. Time's run out and I have to go to work while I still have a job.