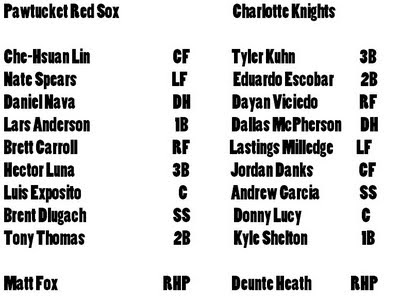 Pawtucket wins both games of the double header v the Charlotte Knights, this game 5-1. Pawtucket starter Matt Fox got the win and is now 7-4. Charlotte's Deunte Heath takes the loss for his team.

Fox pitched six innings and gave up one run on two hits. He struck out eight hitters, so that certainly helped. The Knights scored their run in the fifth, when shortstop Andrew Garcia hit an RBI double.

Deunte Heath. Never heard of him. And then I looked him up and I see that he is notorious. But Heath is a pitcher and that's what I'm here after. The Red Sox first scored off Deunte in the first, when Nava and Anderson hit back-to-back doubles to put up a run and lead 1-0.

Pawtucket didn't score again until the fifth inning. With one out, Tony Thomas and Lin hit back-to-back singles, then advanced on a wild pitch. Thomas scored on a sac fly by Nate Spears, but the real highlight was Nava hitting a two-run homer to right. 4-0 Red Sox.

Pawtucket scored their fifth run in the seventh with a bunch of chippy walky-singleton groundouts.

Reliever Michael Bowden closed the game out for Pawtucket with a scoreless inning that featured a single by slugger Dayan Viciedo.

it's just a shame that's all:
1. Knights manager Joe McEwing was ejected from this game for reasons that defy search engines. As I'm sure you know, McEwing's last season of pro ball was with Pawtucket in 2007. And it was unforgettable.
2. Hector Luna also hit a double.
3. Reliever and noted Australian Shane Lindsay pitched the last two innings for Charlotte. Charlotte's Tom Sorenson reports, "Before Lindsay runs to the mound, he asks a teammate to slap him so hard his eyes water." ALRIGHT, HAMILTON! I would kill to slap someone on the PawSox so hard their eyes water!
4. Shane Lindsay claims he does not drink. An Australian who doesn't drink? What's next, a talking banana?

Damn it, I should have done the other game. It had two Lavarnway home runs and the return of Ryan Kalish. And Junichi Tazawa! I'm very disappointed in myself.

Tonight! Brandon Duckworth, Dylan Axelrod. Should be a soggy, humid game. Enjoy it.
Posted by Jenks at 7:14 AM