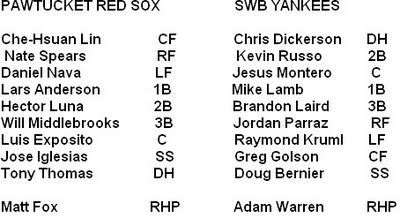 Starting pitcher for the Red Sox was Matt Fox, fit and brimming. Fox pitched five innings, not six or seven, and gave up a run. He also struck out five, including the always dangerous catcher Jesus Montero. Fox only pitched five innings. His pitch count was 71. The game was only seven innings. Injury, schminjury, Fox could have done six.

Handsome Randy Williams wrapped everything up for Pawtucket by pitching the last two innings. He gave up a solo home run to Brandon Laird.

Your starter for the Scrankees was righty Adam Warren. Warren got eleven strikeouts! That's a quality performance, right? I mean, he was one out short of pitching the whole game!

No, Adam Warren gave up six runs. Evidently, Warren was not painty-finessy. I don't know if that's his schtick or if he just had an off night? In fact, I don't know anything. What I do know is this: Warren threw 120 pitches, 74 for strikes. 120 pitches! 120 pitches! The Yankees are fucking crazy!

Pawtucket scored their first run in the first inning when Daniel Nava hit a solo home run. And then the most adorable thing happened in the second inning. Jose Iglesias, Little Iggy, little scarf boy, hit his first home run as a professional. And perhaps his last. But it was his first and it was a darling basket of kittens. And Exposito was on base, so it was a two-run thang. Awwww.

LUNA! in the sixth inning, Hector Luna hit a two-run double to pop the score up to 5-0. And finally in the seventh, Nava hit an RBI double. Pawtucket's scoring was perfectly palindromic, you should see the scoreboard.

et:
1. Donnie Collins is a good man and he puts it down: "The Scranton/Wilkes-Barre Yankees' amazing, four-year run as International League North Division champion is on life support now." HA! Pull the plug!!! JOE, TAKE US TO THE PLAYOFFS!
2. Mike Lamb?! Lamb is never gonna die, I swear. He will play for Pawtucket within the next couple of years, I predict.
3. From the SWB live blog: "Sorry to say this, but if you are the Yankees http://www.blogger.com/img/blank.gifand you have the playoffs essentially on the line, you have to get more than two hits against Matt Fox and Randy Williams. I know they are good pitchers. But the Yankees didn’t change their approach and got overpowered. Story of the season." You think Boston fans are dramatic? Jesus Christ.
4. PawSox Keith can barely contain his excitement: "In game one the PawSox got out to a quick lead off Yankees starter Adam Warren (6-7). Daniel Nava blasted a solo homer in the first and Jose Iglesias belted his first home run of the season, a two-run shot, in the second." Whoa, settle down! You don't want to end up like me, do you?
5. The Yankee Analysts feel that Adam Warren is a tweener. That's not very nice, what if his mom reads that?
6. Also, Pinstripe Alley delves into Adam Warren's psyche, stats, mechanics, and turn-ons.

LATER THE SAME DAY! Game two. Stay tuned, it's a rather happy ending.
Posted by Jenks at 6:59 AM