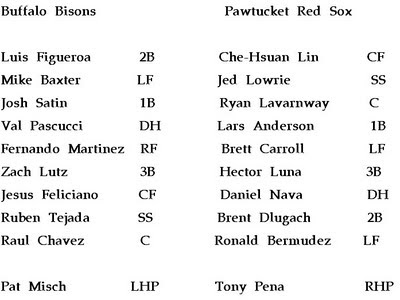 Kevin Millwood is gone?! Oh, well, at least I got to see him pitch Friday night. That was nice of him to make his start before he left.

ZACH DAEGES WAS RELEASED?! Oh! What could have been!

Could be worse. Could be raining.

Pawtucket WINS! all over your face! 11-1 at McCoy Stadium. Gustavo Chacin once again may not even be able to retire minor league bats. I always thought Chacin was cool. I always thought flowers was pretty, too.

Starter for Pawtucket was the dashing Tony Pena and his semi-effective repertoire. Pena pitched seven innings and only gave up one run on six hits, and not one of them was a hit by Josh Satin. Responsible for the RBI was Val Pascucci, of course. Pascucci hit an RBI double in the first inning. Buffalo never scored again that night.

Pat Misch got the start for the Bisons, and this morning it occurred to me that maybe I'd seen Misch in CT. I looked it up and YES! Misch was in the Giants org and he pitched for the Connecticut Defenders when they were the Giants Double-A team that I took for granted. Misch's start was not a disaster - He got a couple of outs in the sixth inning, but his pitch count was up to 110. Typical Mets-style start for some hapless triple-A guy.

Pawtucket first got to Misch in the second inning. Brent Dlugach hit a two-run homer to bring the score to 2-1. Center fielder Che-Hsuan Lin led the third inning off with a walk and then Lowrie hit an RBI double to make it 3-1.

With two outs in the sixth inning, Brett Carroll and Hector Luna hit back-to back doubles to make it 4-1. Misch tried to get that last out afterthat, but Nava singled and it was not to be. Taylor Tankersley took control of the situation and got Dlugach to line out to end the inning.

Okay, now we get to Gustavo Chacin and the most important thing. Bottom of the eighth and Chacin's in for Tankersley. Also, Bisons catcher Mike Nickeas has taken over the nine hole for Luis Hernandez, who came in to pinch hit for Raul Chavez in the top of the inning. This doesn't really figure into the story, but maybe some people out there dig Mike Nickeas.

Chacin struck out Hector Luna to get the ball rolling. Nava and Dlugach then hit back-to-back singles for Ronald Bermudez, who's got a fair amount of doubles in his pants for a light-hitting outfielder. And Bermudez doubled! Two runs scored and it was 6-1.

Chacin then walked Lin. Jed Lowrie... You know, I looked at Lowrie's 2008 numbers in Pawtucket and they are not that impressive. However, in this situation Lowrie hit a fly ball to right for a ground-rule double, scoring Bermudez but not Lin.

Lavarnway was up next and Chacin gave him the old IBB so he could face the better odds of the lefty, Lars Anderson. It worked! Anderson grounded into a double play!

Not really. Anderson responded by hitting his 13th home run of the season to right center. Grand slam. I'm sure Chili Davis clapped the loudest and embraced Anderson the most tightly.

What a buzzkill for Chacin. He got the hook so Brian Sweeney could come out of the bullpen and regulate, and that's exactly what he did. Sweeney got Carroll and Luna out.

Royce Ring came out for the ninth and managed not to blow the ten run lead. MANNY DELCARMEN AND CRAIG HANSEN.

Too bad Kalish had to miss all this.

Pena has been a solid, if unspectacular relief pitcher for us the last several seasons. This has been a disappointment, because Pena was considered by many in the Arz organization to be the closer of the future. When he first came up, his fastball sat at around 96-97. It now sits at around 93-94. The loss in velocity has been troubling, but not devistating, as his slider is his out pitch. And that slider is NASTY. Also throws a change, which is really nothing more than a set up pitch. His control is iffy. He can come in and be hit his spots, and the next night he couldnt hit the side of a barn. His control was less of an issue when he was throwing 97, but with the loss of a few mph, control becomes that much more important.

I always got nervous when Pena entered a close game. He has never in his career been the take charge, no nonsense reliever. I read a post above as to why Pena was never given a shot as closer in Az. Thats because he simply doesn't have the mentality for it. His biggest weakness is his menal toughness or lack there of. He lets a high % of inherrited runners to score, and has a tendency to be a thrower rather than a pitcher in tight spots, which leads to alot of trouble.

2. Jed Lowrie hit three doubles last night. After the game he did mention that aside from working out/seeing pitches/getting quality AB's, he was trying to help out the team. I was WAITING for him to say that! If he didn't I would have found him and frozen his head.
3. Val Pascucci is second in the IL for RBI.
4. Bermudez and Nava both went 3-3. The only Red Sox player without a hit was Lin, who did walk a couple of times. Luis Exposito DNP.

This afternoon, weather permitting, Chris Schwinden will pitch with a purpose for Buffalo. Kyle Weiland goes for Pawtucket. The team's only a half game behind Lehigh Valley for the division lead, so let's get excited. Or... Boston makes the playoffs and rips away Pawtucket's best, leaving the team edentate and listless and with no chance in the IL Playoffs.