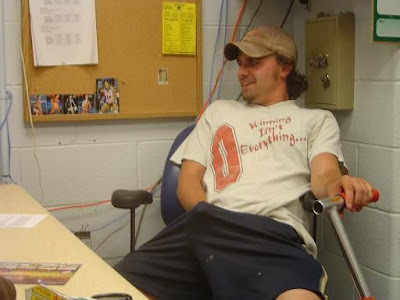 7-1 Pawtucket, and if you don't care about pitching, then you probably only needed to see the third and fifth innings.

Red Sox starter was Steven Wright, although I may have said it was someone else. Mortensen? I saw Wright on television recently, pitching poorly for Boston, and I had  no idea he was such a burly dude. Wright pitched seven innings and only gave up one run on seven hits. He threw 98 pitches, and this kind of going deep into ball games stuff doesn't ordinarily fly in the Boston org, but it's knuckleballin'.

Ryan Tatusko took the Chiefs' loss. He wrapped it in funereal burlap, went into his backyard as thunder rolled, dug drenched in the dirt and buried it like a beating heart. Lesser men would have screamed at the furious sky, but Tatusko went inside to play video games. Five innings, seven runs.

So in the third inning, CF Ronald Bermudez led off with a single. Tatusko hit the catcher with a pitch... No, not Jean Nate Solano, but the catcher who batted. Alberto Rosario.And then: "Jackie Bradley Jr. doubles (22) on a line drive to right fielder Chris Rahl. Ronald Bermudez scores. Alberto Rosario scores. advances to 3rd, on a missed catch error by shortstop Danny Espinosa." I think you a word, Minor League Ball!

Mark Hamilton hit an RBI single later in the inning and it was 3-0 Pawtucket.

Bottom of the third, perky third baseman Josh Johnson scored on a passed ball. Could have been worse, Wright gave up three singles. 3-1 PawSox.

Fifth inning, catcher Alberto Rosario led off with a single, then later scored when Xander Bogaerts grounded out. Mark Hamilton doubled to center, scoring Jackie Bradley Jr and Alex Hassan. Hey, where did those guys come from? An error and single, respectively.
inzger

Jose De La Torre and Brock Huntzinger pitched the remainder of the game. Simultaneously, it was crazy! You should have seen Mary Tyler Moore in the box, flailing at two balls.

two things:
1. Bud Poliquin rhapsodizes about Josh Johnson: "Josh Johnson, who has to be in the conversation when it comes to identifying the perkiest Chief -- like, ever -- spent his nine innings looking like a kitten bouncing around the living room with a ball of yarn." Oh, my.

2. And Josh Johnson's dad was an Expo, which is the same organization in case you forgot. Remember when they played all those games in Puerto Rico?

3. Donnie Webb: "Pawtucket manager Gary DiSarcina said it was not Wright's best performance of the season - he has two complete-game wins this season for the AAA Red Sox - but it was solid, especially coming back from the tough outing against Houston." - Oh, snap! Wright has a couple of CG's? That's what I get for sleeping for two months.

4. And here is Ryan Tatusko eating a giant sandwich with the Syracuse radio guys. I listened to the whole thing, it's killer. One day I will meet Jason Benetti and... Nothing, never mind. I missed my chance.

Off day today for the PawSox, then tomorrow will be a Louisville Bats homestand. Charlie Haeger will pitch v Chad Reineke. Maybe if you get there early enough you'll run into Tim Wakefield. But probably not.
Posted by Jenks at 11:48 AM