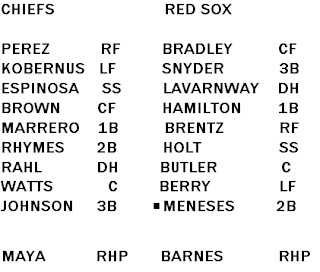 Pawtucket wins, improbably, 2-0. Zany. Freshie Matt Barnes gets the win in his Triple-A debut, so thanks for this, Meat.

Barnes pitched 5 1/3 innings, was replaced in the middle of the sixth so lefty Ryan Rowland-Smith could face the switch-hitting Danny Espinosa. Barnes gave up three hits, walked two, struck out seven. Pitch count was 86, right around that Pawtucket magic number that Gary DiSarcina likes to push against. JUST DO YOU, GARY.

Yunesky Maya, who's been around a bit and probably slept with a lady, started for Syracuse. Maya struck out nine batters, but gave up two paltry runs and therefore lost the game. This is the kind of thing that leads to gang warfare on teams... Pitchers v Position Players, the original baseball cliques. Maya should probably be most angry with right fielder Eury Perez, who thrice came to the plate with two outs, RISP, and did not get a hit. YOU BASTARD HE'S JUST A BABY!

The Red Sox scored both their runs in the first inning. Jackie Bradley Jr, Brandon Snyder, and Ryan Lavarnway hit consecutive singles. One RBI for Lavarnway, one for Bryce Brentz, whose groundout was productive.

Rubby de la Rosa, Chris Martin, and Anthony Carter went on to stymie the Chiefs offense for the remainder of the game. Somehow this whole thing lasted three hours. I tried to dig up some quality stuff on Anthony Carter, as I maybe wanted to actually learn something, but he is a phantom. All I got is that he's from Georgia. Just want you to know that I tried.

two things:
1. Jackie Bradley Jr, HBP. How do you treat all those ball punches? I've seen what your skin looks like, has to hurt pretty badly. Right? Can someone find out for me?

2. Oh, here's something! Anthony Carter tied the Pawtucket saves record, set in 2007 by the Mighty Travis Hughes! Hughes was a tank, remember?

3. Hey, Chris Hogan! I love you, but you spelled "Quintin" wrong not once, but twice. And Danny Espinosa.

4. Speaking of Espinosa, I tried to dig up more trade stuff, but the internet cares more that he a) has a beard and b) has a sexy wife. BOOOOO!

5. Jason Benetti is the man. That is all.

Tonight, Clay Buchholz. I'd go, but I have my fantasy football draft. Baseball's slipping right out of my hands.
Posted by Jenks at 11:17 AM