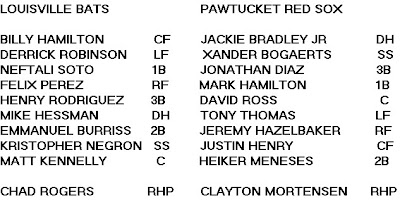 PawSox, what, win again, 6-5 over the Louisville Bats. HUH?! "Let him that hath known himself unto thine truth walk therein."

ClayMor, who is not a starter if you haven't heard, pitched six innings, gave up a run. So that was good. Jose de la Torre came in to relieve him and nearly ruined Christmas. I'll get back to that, though.

Chad Rogers started for the Louisville Bats. He gave up six runs. He pitched five and 1/3 innings. He allowed two home runs. He maketh me to lie in green pastures.

3-0 Pawtucket. In the fourth, shortstop Kristopher Negron hit an RBI single, changing the score to 3-1.

And here's something! Sixth inning, one out, Bogaerts and third baseman Jonathan Diaz hit back-to-back singles for big boy Mark Hamilton. Hamilton drove one to right, WAY BACK! GONE!

(By the way, watching David Ortiz hit bombs at Fenway Park has been one of the greatest baseball delights I've experienced. It's indescribable.)

So it's 6-1 going into the seventh inning at McCoy Stadium. Here's De La Torre, who right off gives up a pair of singles. And then Derrick Robinson hit a line drive to right that turned into a ground rule double. RUN. Neftali Soto then doubled... TWO RUNS. Then Felix Perez singled... RUN. STOP I'M GONNA PEE!

But Gary DiSarcina kinda wants to maybe win sometimes. Also, he's aged very nicely. Not that he's old, he's not. Just saying he's very, very good-looking. In a way that he wasn't in his younger days. Am I out of line?

That's it, right? Brayan Villarreal and Anthony Carter pitched the rest of the way. Thank you, gentlemen.

two things:
1. Jose Diaz pitched the last of the Louisville Bats side. You remember this guy? Dirigible? He's like Walter Young out there.

2. "Kevin Mitchell is Batman" misses Derrick Robinson: "Derrick Robinson, big league ball player, is a sign of a healthy baseball ecosystem.  He's the remora cleaning the Great White.  He's the Oxpecker that sits on the shoulders of a rhinoceros, eating the flies that would otherwise plague the beast while simultaneously being kept safe of any predator that may want it for lunch. He's the Gari you eat after your sushi." (Red Reporter)

3. So Chad Rogers, starter for Louisville, is an up-and-comer fresh from Double-A. Also he was bitten by a shark this one time: "When I pulled my foot out, I was bleeding all over the place. I was kind of freaking out. I never thought I would get bitten by a shark." Jesus.

4. Mormon Baseball has a thing on Mortensen: " [H]e is likely good enough to again make the team’s 40-man roster when the roster is expanded ahead of the end of the season. Of course, Mortensen might also be a strong enough prospect that the Red Sox will trade him in search of high calibre players that will keep them at the top of the American League East." Are there any Atheist balllplayers? I'm asking for a friend of mine who is going to roast eternally in the fiery pits of HELL.

TONIGHT. Anthony Ranaudo, for all you prospect-horny freaks. The Bats will counter with Greg Reynolds. THE Dooley Womack?