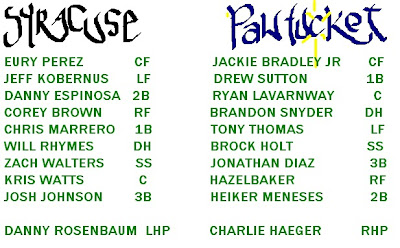 Pawtucket defeats Syracuse, 5-4, thanks to Drew Sutton and no thanks to Pedro Beato. Win goes to De La reliever, save goes to IL All-Star Anthony Carter.

Lefty Danny Rosenbaum pitched six innings, gave up four runs, struck out six. The Red Sox scored one run in the first. Bottom of the second, Heiker Meneses tripled and it was so exciting that some fans had spontaneous orgasms. Jackie Bradley followed that with an RBI single. 4-1 Pawtucket.

Seventh inning, reliever Pedro Beato pitching his second inning of the night. The Chiefs loaded the bases against him and all those runs scored after Jose De La Torre came in. DON'T LIKE IT PLAY BETTER.

And so it came to pass that the game was tied 4-4. Bottom of the eighth, Drew Sutton hit a solo dong off reliever Mark Lowe, no relation to Peter.

PawSox, you guys are unbelievable. I am going to put your picture in a sparkle frame and sing Air Supply songs to it. JOE, TAKE US TO THE PLAYOFFS!!!

happy birthday to My Family:
1. Chiefs 2B Danny Espinosa went 3-5 and they are trying to trade him maybe.

2. Welcome back to this game, Tony Thomas, but then go back to Portland and play with JC Linares. Maybe go get a truck stop breakfast. Then bring back my Tony to me. Oh and Matt Barnes is in Rhode Island, which is almost like Massachusetts except Dirty.

3. Eddie Pannone talks a lot of Pawtucket, like he's been there: "Even if the team qualifies for the playoffs, September call ups will change the make-up of the team’s roster." First of all, Eddie Baby, it's happening.

TONIGHT. Matt Barnes gets the start, and I would go but I have Media Club. Yunesky Maya will oppose and don't I love Maya? I forget.
Posted by Jenks at 4:54 PM