4-1 Scranton, Caleb Cotham gets the win.

Starter for Pawtucket was Charlie Haeger. Haeger gave up three runs on seven hits through six innings. Brock Huntzinger was Pawtucket's sole reliever in this game, pitching the last pair of innings and giving up the fourth run.

Caleb Cotham gave up seven hits just like Haeger, but the Red Sox weren't able to bring anybody home until the last inning. They came very close to being shut out, but for some reason after righty Dellin Betances struck out the first two batters in the ninth, he started losing it. Jim Miller had to take over and get the final out.

Justin Henry drove in the only Pawtucket run. Don't you think he has a weirdly-shaped head?

Hazelbaker got a couple of hits. He's so gross.

Derek Jeter didn't get any hits and drew a walk. In case you care about Derek Jeter.

let's talk about caleb cotham:
1. "Raised in Mt. Juliet, Tennessee, Cotham went to Vanderbilt and was drafted by the Yankees in the 5th round of the 2009 draft. He signed for $675,000. His first season as a pro he re-aggravated a knee injury and was shut down for the season. He did not pitch again until 2011, when he served as an effective reliever in Staten Island." - Good stuff from Bronx Baseball Daily.

2. From 2011: " Cotham was a three time all-district selection, and two time captain of his high school team in Mt. Juliet, Tennessee. He drew attention from the major leagues after striking out 84 in 79 sophomore innings at Vanderbilt, and producing a 0.00 ERA in the 2009 Cape Cod League. It was also because of his excellent fastball that can reach 92-95 mph, and his promise of having good secondary pitches. His out pitch may be his slider, which has natural bite. The Yankees thought enough of Cotham to sign him at well above the slot for his draft position." (The Baseball Historian)

3. Commenter "nycsportzfan" (groan) has this to say on River Avenue Blues: "One of my fave sleeper prospects since hes signed has been Caleb COtham. I love the smart vandy kids and he knows how to pitch. The injuries have derailed him but he getting it done now. I’m telling u, this dude will be better then Warren and Phelps if he stays healthy. Cotham can flat out pitch!" This commenter's a total plant, right? Probably his mom.

4. From 2008: "I’m a fastball guy. I like to establish my fastball both sides of the plate and once I do that, I like to throw a slider for a strike and then have a slider that I can throw in the dirt as a chase pitch. I also show a change up to keep them in check."  - The Sports VU

5. The last time Cotham started against Pawtucket, it didn't go very well and it inflated his ERA to 7.-something. What was different this time? "I think the difference right now is I’m not making too much out of a hit here, a walk there,” Cotham said. “I’m able to get back on track a little quicker. I’m definitely pitching with confidence and it’s nice to have the results.” - Dave Rosengrant, some newspaper.

6. "Cotham opened the '13 season with Trenton in the Eastern League. After going 2-1 with a 3.72 earned-run average in seven appearances, six of them starts, he was called up to Scranton/Wilkes-Barre RailRiders of the Class-AAA International League." That's a rundown of this season. (Andy Reed, Lebanon Democrat)

7. Donnie Collins, who is like seriously so great and I love him and I wish he were my son, believes the Yankees minor leaguers aren't currently ready to contribute.

8. And finally, here is the comprehensive profile on Cotham, with scouting report/outlook/background/video/comments from River Ave Blues again: "His bread and butter is a heavy low-90′s sinker that he can command to both sides of the dish. He’s flashed mid-90′s heat with tremendous sink working out of the bullpen. A sharp slider that has touched the upper-80′s serves as his second pitch. Cotham has also shown some feel for a curveball that’s more 11-to-5 than 12-to-6, as well a changeup, the latter of which will be his primary focus in 2010. He projects best as a power late-inning reliever, though starting isn’t out of the question."  Very nice indeed.

Bonus: Here's a picture of Brock Huntzinger wearing a drug rug. Will there ever be a wordly, sophisticated baseball player? Where are the Wade Blasingames of the world? Is it just a series of rednecks and rubes and meatheads? Have you ever overheard baseball players talking about women? It's pretty nasty and... I mean, if some of their girlfriends only knew.

Not you, Brock. I'm sure you're up on current events and Carl Sagan's philisophies. 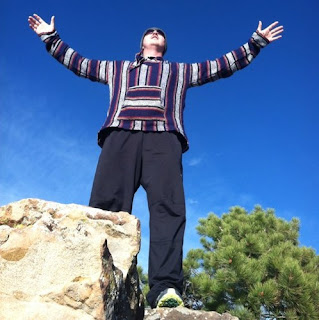