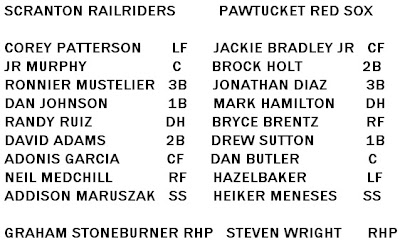 Scranton Wilkes-Barre wins, 2-1, so another tight little game. Win goes to Graham Stoneburner. I'll bet these teams are really sick of each other. Poor Drew Sutton, having to make awkward small talk with all the Scranton baserunners. (WHAT BASERUNNERS? HAR HAR HAR.)

Mister Rubber Burner pitched six innings and gave up one little run, which was a home run made by Hazelbaker, who bakes hazel. Jeremy is sweet and simple, like a baker. I would not be surprised to find out that he had worked in a  bakery before coming here.

Steven Wright also gave up a run, which is great, but the Pawtucket position players couldn't drive anyone in to get him the win. Bastards. Wright struck out six and walked two, which is better than Charlie Zink usually did.Wright also didn't hit anybody at the plate. Like Zink regularly did, in a record-setting fashion.

So the losing pitcher was Brock Huntinzer, reliever. Huntzinger, sorry. Isn't that a micro-brew? No, more like a German beer that nobody likes. In the seventh inning, right fielder Neil Medchill hit an RBI single off Huntzinger. That was it, Pawtucket could not make anything happen after that. Jonathan Diaz tried, though, hitting a double off Dellin Betances. Diaz is a good guy.

Rubby and Brayan finished the game off. Thanks, lads.

two things:
1. Dellin Betances hit Jackie Bradley Jr with a pitch. Bradley's tied for first on the team for HBP. He shares this honor with Jonathan Diaz. I wonder if they're friends in real life? I'll bet they're always at the park on a bicycle built for two.

2. Bryce Brentz is back. So Bryce and two dudes named Brock. This team is so 'neck it hurts. Yee haw? OH DUDE I was doing trivia Sunday night and this guy warily walks into the bar and I was like, oh, hey, that's Brandon from the PawSox. And he's with this guy who I think is Brock Holt. And a woman. And I said to my team, that is Brandon from the PawSox and I cannot remember his last name. And then I left and in the parking lot were two ridiculous gun-rack Texas trucks. All the confirmation I needed.

3. In 2007, Huntzinger was 19 years old: "He is a scouts dream. He stand 6'3" 215 lbs and can afford to put weight on. He is an extremely athletic kid that was great both ways in High School. He will be a pitcher for the Red Sox and has some great treats to start with. He has a smooth delivery, that will require very little tweaking." - Red Sox Outsider

4. Both RailRiders runs were unearned.

5. Clayton Mortensen's been traded for KC's Quintin Berry, light-hitting outfielder. "Berry is not currently on the Sox 40-man roster but should be for September call-ups. The Sox look at Berry as potentially being used to help out on the base-path if that need arises in September or beyond. Berry has 28 steals in 32 attempts." - from Fenway Refugees. That's too bad, Mortensen was pretty successful as a minor-league starter.

Okay turn it off now.