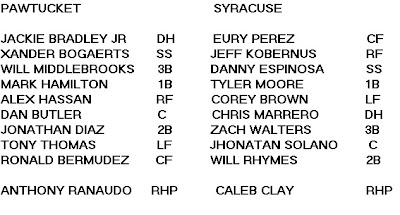 Syracuse takes it away, 5-4. Darn it! And now Pawtucket's four games out of first and only a little bit of a wild card contender. COME ON YOU BUTTHOLES.

Anthony Ranaudo was the losing pitcher for Pawtucket. So he's 1-1. I'll bet he likes winning a lot better. Ranaudo pitched five innings and Syracuse got eight hits off him that led to five runs, four earned. Good work, Chiefs.

You all remember Caleb Clay, right? Says crap like "@BrockHuntz24 everything is better in the south bo! Faster you learn, better off youll be! #atsrightbruther"? Evidently I last saw him in New Hampshire, closing a game out for the Fisher Cats. It appears I had a swell time that day. Clay's been pretty successful so far in his first Triple-A season, but I'll get into that later on. In this game, Clay gave up three runs through five innings. He struck out nine batters...

A LIST OF BATTERS THAT CALEB CLAY STRUCK OUT LAST NIGHT IN NEW YORK:

Ranuado actually came out to pitch the sixth inning, but after a walk, a couple of singles, a sac bunt, and an error by the catcher Dan Butler, he gave way to Ryan Rowland-Smith. Rowland-Smith stapled down the last three outs but Pawtucket's 3-2 lead magically became a 5-3 deficit. So it goes.

Ninth inning, Syracuse reliever Erik Davis came in to save the game. And he did, but Pawtucket really missed an opportunity to beat Davis bloody. Jonathan Diaz and Tony Thomas hit back-to-back singles to kick the inning off, and then a sac fly by Bermudez scored Diaz. Bradley Jr struck out, Thomas stole second, Bogaerts worked up a full count but ultimately flew out to left.

2. "Terrific since his promotion from Harrisburg, RHP Caleb Clay has won three straight starts for the Chiefs and is 3-2 with a 1.62 ERA in five games. The 25-year-old former Red Sox prospect has allowed just one run over his last 19 innings. He went 6-3 with a 3.46 ERA for the Senators before earning his promotion." - Says it all, I suppose.

3. Mayflies and Big Flies has a tidbit on Clay also.

4. By the way, Pawtucket was swept in Thursday's double-header v Syracuse. Read all about it here.

5. "Caleb Clay continues to impress; how did he not success in Boston’s organization?" - I don't know, Todd Boss. He should have successed.

6. "Continuing their thrilling offseason, one that rivals the Blue Jays’ in terms of excitement, the Nats have signed Caleb Clay to a minor league deal. Clay is one of the only players in MLB history to be a compensatory pick for a team losing Bill Mueller. What an honor, perhaps even a Hall of Fame worthy accolade." - The Zimmerman(n) Telegram is really going to miss Collin Balestar.

7.  In 2007, Over the Monster smushed some information into a post about Clay and it was informative. Informative information, as it were. God, we were all so young.