8.13.13 Louisville Bats (CIN) v Pawtucket Red Sox - Of All the Charlie Haegers in the World 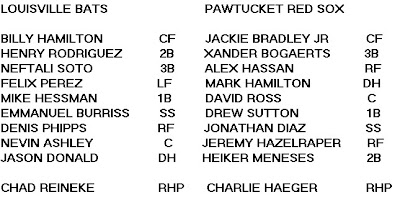 Red Sox win, 5-1, in the merriest matchup you'll ever see!

Winning pitcher and early pioneer of the Great Knuckleball Resurgence Charlie Haeger pitched six innings and only gave up one run. And RESPECT! to catcher David Ross, who allowed 0.00 passed balls. Such a pro.

Chad Reineke started for the Bats, got a couple of outs in the game, but hurt his arm and had to split. He'd thrown thirty pitches so something was amiss from the get-go. Five relievers had to come in and try to make a game of it, but Kevin Whelan gave up three runs and he was slapped with the loss.

In the first inning, third baseman Xander Bogaerts singled and later scored on a groundout. 1-0 Pawtucket. The Bats tied it up in the fifth by way of a sac fly by third baseman Neftali Soto. I was really hoping it was a Mike Hessman home run.

Fifth inning. With two outs, Jackie Bradley walked. Bogaerts singled and Alex Hassan walked to load the bases. This precipitated a pitching change and Zach Duke came in to get the last out. Mark Hamilton, Designated Masher. Lefty-lefty. Strike one! And then SHA-POW! Grand slam! ALRIGHT, HAMILTON!

Chris Carpenter pitched some meaty innings, going 1 2/3 with a bunch of zeroes and one K. Ryan Rowland-Smith and Jose Contreras finished things up and the three relievers combined did not give up any hits. Or walks. No one got on base. Not even on-base machine Nevin Ashley, who says crap like "God bless USA and God bless all the men and women serving to keep this nation the greatest nation in world. Happy Fourth of July"

2. I just looked and the Louisville Bats are last in the league for OBP. More like the Lousiville Bats, amirite ladies?

3. Brad Emons has a pretty good thing on Haeger: " We were on hole 15 or somethin and I got a call saying ‘you’re pitching tomorrow. That’s just part of the gig. I had to take a 6 a.m. flight and a couple of hour layover in Philadelphia and I didn’t get in 1:30. I had about two hours sleep and had to pitch that night.”

3. Tim Britton is informative: "It was Ross’ third rehab game." "Rowland-Smith and the Red Sox agreed to alter the left-hander’s opt-out clause in his contract last week. Instead of opting out on the deadline date of Aug. 5, Rowland-Smith remains in the organization, with the option to opt out if another team is willing to put him on its 25-man roster." "[Iglesias'] tendency toward flashiness has drawn critics. DiSarcina, who was the organization’s infield coordinator when Iglesias first signed in Boston, isn’t one of them." Thanks!

4. Unfortunately, I know very little about Chris Carpenter. I don't even have a sense of who is is as a player and as a human. His local paper provides insight, though! "Bryan native Chris Carpenter tossed 1 2/3 innings of scoreless relief in Pawtucket's 5-1 victory over Louisville in the International League on Tuesday."

That's it. That's the entire article. Thanks, Byline Goes Here!