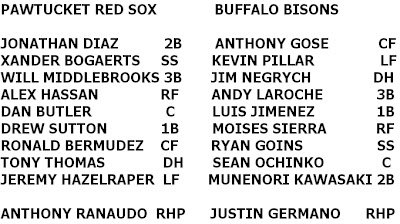 Pawtucket WINS! 8-1. This is in spite of dynamic, protein-enriched pitching by former Sock Justin Germano and his Amazing Regenerating Five-O-Clock Shadow. Or maybe enormous pitcher Anthony Ranaudo did a good job. Just look at his terrible eyebrows.

Ranaudo pitched six scoreless innings in his Triple-A debut. He gave up four hits, all crappy little singles, and struck out five. He walked, um, nobody, so get back in position, assholes!

Starter for the Bisons was Germano. DH Tony Thomas hit an RBI single in the second to put the Pawtuckets up 1-0. Germano didn't really start falling apart until the fifth inning, though. Ronald Bermudez led off with a single, and I still don't understand how Ronnie B fits into this organization. Is he charming? Is he blackmailing someone? He's been around since '06 and his earliest time in Rhode Island was 2011. Oh my god, am I in love with Ronald Bermudez?

Bermudez led off the fifth inning with a single. Tony Thomas, who I love for real and I wish he was my son, followed with a double. And then Jeremy Hazelbaker hit an RBI single and stole second. In spite of that production, I do not care for Hazelbaker. Hate him and I can't explain it.

So 2-0 and Jonathan Diaz hit an RBI single. And then so does Xander Bogaerts. And then so didn't Will Middlebrooks. No, sorry, Middlebrooks popped up to the infield. But he looked good doing it! It was catcher Dan Butler who dealt the final fifth-inning blow. And if you think my using the word "blow" in a sentence about Dan Butler is a coincidence, then you never really knew me at all.

5-0 Red Sox! And now the seventh inning with Buffalo's Bobby Korecky pitching. You may remember him from such films as "Red Wings, Redder Blood" and "Viva Reno". With one out, Bogaerts doubles to left. And then Alex Hassan batted him in. Alex Hassan wants to have me killed probably, so I'll just say wasn't that nice? 6-0.

Buffalo scored a run off Brock Huntzinger in the eighth inning. It was left fielder Kevin Pillar who hit an RBI single. "Kevin Pillar" is the name Millar uses at strip clubs when he pretends to be the CEO of a Japanese conglomerate.

Ninth inning, Jeremy Jeffress pitching for the Bisons. Dan Butler whips it out again, batting in two more runs. Chris Carpenter closed out the ninth, one two three. Thanks!

two things:
1. Tony Thomas is back! I thought he was gone forever! Now we gotta get Alex Valdez and Matt Spring back.

2. Everybody on the PawSox got a hit. Dan Butler came up huge, with three RBI.

4. Middlebrooks made two errors. Man, is he tall!

5. "For a guy who seemed to be fading late in the season (albeit with a reasonable excuse), making an opposing Triple-A team look this powerless in his first game at the highest minor league level is an entirely welcome shock." - Ben Buchanan, Over the Monster. Cool story, Puke-anan. (Sorry.)

6. Clint Hulsey gets into Ranaudo's pitching in a way that I don't really understand because I'm on my period and I'm bloated and I need chocolate and shoe shopping.

7. "Ranaudo is an imposing presence on the mound. His delivery is a bit odd, slow and meandering to start before everything speeds up toward the end. It looks odd and uncomfortable and may or may not have a little bit to do with the two arm injuries he’s had over the past few years and the problems he’s had with control in the past. One thing I positively love about Ranaudo’s delivery is his arm angle. It’s a nearly straight over the top offering that allows Ranaudo to take full advantage of his frame and create more downhill plane on his pitches than I’ve seen out of any other prospect this year." - Eric Longenhagen has this blog you should read.

8. Anthony Ranaudo is clean. Real clean, like my conscience. "I guess the one thing that I do before every game is I always take a shower like 45 minutes before the game. People are like “how do you take a shower right before a game if you’re just going to go out there and sweat?” I just always take a shower before the game. It kind of mentally, the shower just puts me in the zone. Everything that’s going on outside the field and everything, just kind of washes away and now it’s focus time."

TONIGHT. Allen Webster. Webster has a baby face and an air of innocence and vulnerability, but do not be fooled. I wouldn't fuck with that kid. He opposes Buffalo's Chien-Ming Wang. Hmm, must be some other Chien-Ming Wang who is a pitcher. Can't be the former Yankee.