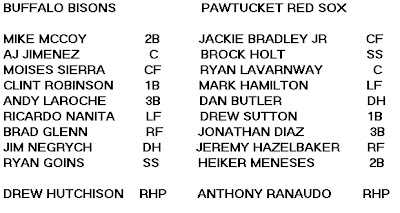 I'm back from my time in Beverly/Gloucester/Ipswich/Essex/but mostly Gloucester. I was waiting for a baby to come and then finally it did yesterday morning while Al Roker was opening colorful gifts on television. And do you know how hard it is to find good pizza up there?

Pawtucket defeated Buffalo 1-0, how exciting. Starter Anthony Ranaudo was good again, pitching into the seventh inning and only giving up three hits, all singles. Ryan Rowland-Smith snapped up the last out in the seventh, then Jose De La Torre and Anthony Carter handled the rest.

The Buffalo Bisons starter was Drew Hutchison, who was nailed with the loss after he gave up one stinking run. Drew Sutton hit an RBI single in the fourth.

Former PawSox legend Justin Germano pitched the last three innings of the game, so I guess he's a reliever now? Germano should have started, that's what I say. He only threw 29 pitches, 22 for strikes.

two things:
1. I've been really disappointed with the traditional news coverage of the PawSox this season. More and more I've been relying on blogs for that stuff. But even then, slim pickings. There was a time when competition made me uneasy, but WHERE HAVE YOU GONE JOE DIMAGGIO?!

2. Not you, Over the Monster, with your consistent and insightful ways: "Through 20 innings in Triple-A, Anthony Ranaudo has a 1.93 ERA. Fewer true outcomes, either good or bad, but he's getting the job done after it looked like fatigue had set in." - Plus Marc Normandin is so fucking classy.