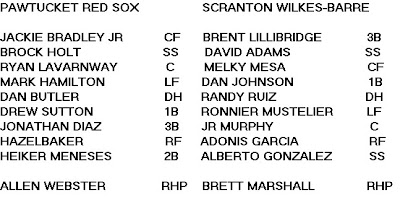 Yankees lose, 6-3, and the PawSox are ONE HALF GAME OUT OF FIRST PLACE in the IL North. Don't dive into a swimming pool of liquor just yet, though. Still twelve games left!

Starter for the Pawtuckets was Allen Webster. He threw 104 pitches. Gary made him do that. Gary is REBEL MANAGER.

Webster gave up three runs, struck out seven, got a couple of outs in the sixth before he was replaced by the mysterious Chris Carpenter.

The RailRiders' starter was Brett Marshall, who says crap like "@MarissaBoulos is the best girlfriend ever! Surprised me by coming to see me this weekend and had no clue! Love you!" (HAAAAAAAAA!!!! LOLOLOLOL). That really reads like he's sending a covert message to his side piece(s).

But enough about Marshall. Pawtucket was the first team to score, when Hazelbaker hit a two-run double in the top of the second. Scranton picked up a run in the bottom half, but then the Red Sox scored again in the third, by way of a sac fly by Mark Hamilton. 3-1 Pawtucket!

Top of the fifth, Pawtucket loaded the bases with three consecutive singles. No outs. A force out and a sac fly scored another pair of runs. Bottom of the fifth, Scranton scores a third run.

In the sixth inning, RailRiders manager Dave Miley was ejected. Let's dig into that! PawSox killer Melky Mesa walked with one out, then stole second. Webster followed that by walking Dan Johnson. Mesa stole third base. Then Randy Ruiz, not sure where they dug him up but Ruiz struck out.

Enter Chris Carpenter! (Don't mind if I do!) (Ew, sorry.) Ronnier Mustelier hit a ground ball to short, scoring Mesa. Catcher JP Murphy was the next batter, and at some point tried to check his swing but it was called a strike by HP umpire Sean Barber. Dave Miley disagreed vehemently and got the boot.

Ashley Teatum explains: "On an 0-1 pitch, Murphy thought he had checked his swing, but home plate umpire Sean Barber said he went around. Murphy stepped out of the box and had some words with Barber, and the umpire turned to toss manager Dave Miley, who had shared some words of his own from the dugout. Miley emerged from the dugout to spend a good two minutes explaining his dismay, and left shortly after."

Murphy K'd to end the inning.

Hazelbaker scored on an error in the ninth. Lots of cheap scoring in this game. Scoring on a ground-ball out is the lamest thing in baseball, although balks are pretty close.

TONIGHT! Derek Jeter's rehabbing in Moosic, so that'll put bums in seats. Steven Wright will pitch, Graham Stoneburner will pitch. Maybe Jeter's girlfriend will show up and surprise him so he can loudly say, "OMG LOOK EVERYBODY MY GIRLFRIEND IS HERE! THAT I LOVE VERY MUCH BECAUSE SHE IS AMAZING! YES SIR, MY GIRLFRIEND IS HERE!"
Posted by Jenks at 11:27 AM