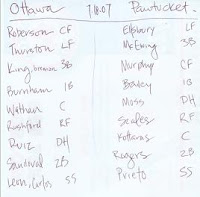 Pawtucket WINS! 9-4 and I AM BACK! It is four a.m. and I just got home after severe weather and flight cancellations and whatnot impeded my progress homeward but I just couldn't go to sleep without taking the opportunity to catch up a little on PAWTUCKET!

Your amazing and lovely starting pitcher was the well-known but sorely misunderstood studboy Jon P. Lester. JL pitched seven innings and gave up seven hits. He gave up three runs. He had 3 walks and 3 Ks. He walked off the field alone. The field was jammed with broken heroes on a last chance power drive. Craig Hansen pitched the eighth and yes, gave up the fourth run. Twenty-eight pitches, because I like to broadcast that kid's struggles. Nutmegger Craig T. Breslow pitched an uneventful ninth and was mobbed by the Cohasset Middle School band as he exited the stadium.

Righty Landon Jacobsen pitched seven innings and gave up all nine runs. Do you know this guy? I have never heard of him, myself. I will provide backstory as it becomes available. Iowan Joseph Bisenius kicked off the eighth inning by walked three batters. Post-yanking, PawSox fans were treated to an appearance by Kane Davis. The End.

So, okay, we do have the nine runs to figure out. I know that Kottaras doubled. I know because I read it five times and my vision did not unblur and the letters that spelled his name did not swirl themselves into the more familiar doubler "Michael Tucker" or something. David Murphy had a three-run homer. Ed Rogers had a pair of RBI as well.

Ellsbury and Scales were both HBP (Jacobsen). Bailey was caught stealing and Ellsbury was picked off.

That's all for now. I'll do a quick rundown of all the games I've missed and call it a damn day. I'll be at the park Friday night. Oooh, also I'll do the Iowa Cubs games I attended. Natch.
Posted by Jenks at 3:44 AM

For your information, Rusty slept in his UNDERpants last night.