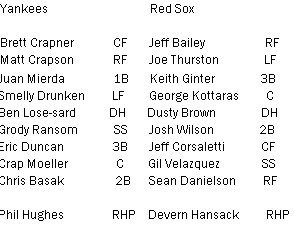 Two crazy games in one night. One quick thing: Crisp gets the call for two outs, Zink gets out of the inning. Should have happened, right? I think that of all the scenarios that must have gone through Zink's head as he lay wide awake in bed the night before, that was probably not among them.

I'll bet he's in a wicked bad mood today. I should avoid him.

Okay, Devern Hansack. My man. Hansack only went into the sixth inning before being replaced by Switzer. What? Four hits and two runs is so shabby? I hope it's not an injury thing.

Switzer held it down, Eric Hull got out of a bases loaded jam. That wasn't the problem. They both kept the game tied. The weird thing was Chris Smith coming in and giving up a three run homer to Yankees catcher Chad Moeller. Argh.

But! Pawtucket tied it up in the bottom of the tenth! Corsaletti, Velazquez, Danielson, Thurston, and Bailey all got hits. Thurston and Velazquez got the fattest hits... doubles. Had I been there, I might have applauded and wept.

Jose Vaquedano came into the eleventh to try and keep the cake together. It didn't happen. The Yankees scored a pair of runs and this time, Pawtucket couldn't answer back. That is terrible. Tough loss.

This whole pennant race thing is resurrecting old miseries. 2003, 2004. I had forgotten what it does to your guts. Oh my god. Here we go.

Tonight's Poster Night at McCoy. El Guapo gets the start. I want a win. It might as well be September.
Posted by Jenks at 11:17 AM