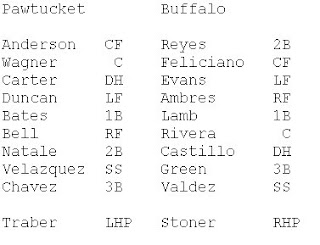 Billy Traber is in the rotation to stay, I guess. Traber did a good job, only giving up two runs in six innings.

Pawtucket shocked the fans, Ron Johnson, the pitching staff, their parents, the front office, the Bisons, and your mom when they scored three runs in the third inning. Jeff Natale led the third off with a walk, got moved over when Angel Chavez grounded out, and then raced home when Brian Anderson singled.

And then! Mark Wagner hit a homer with Anderson on first. It was Wagner's first home run with the Red Sox. Wagner also zipped one out in the eighth inning to give Pawtucket a 4-2 lead.

Fernando Cabrera closed the game out successfully, although he kicked off the ninth with a pair of singles. Cabrera had not pitched in eight days, mostly because he'd left the team for a bit (baby). His rust was evident... Cabrera did give up a run but wiggled out with a win.

Righty Tobi Stoner got the loss for Buffalo. It has to be depressing to give up a home run to Mark Wagner.

nosferatu... why don't you come to your senses?
1. Rocky Cherry pitched two kickass no-hit relief innings in 13 pitches!
2. Jeff Natale and Angel Chavez were both caught stealing.
3. Andy Green hit a home run for the Bisons. Wasn't he briefly on the PawSox this year? This spring? In the off-season?
4. The Bisons had their biggest crowd all season, some 17,000-odd fans. I'll bet they outsell the Marlins.
5. The Bisons were defensively glamorous in this game. I heard it and I read it, so it must be true.
6. Both Billy Traber and Fernando Cabrera have played in Buffalo. Ask them how much they loved those April games.

Okay, the team's off to play the Yankees in Scranton/Wilkes-Crappy. Please, make it quick and painless.
Posted by Jenks at 8:37 AM