The Red Sox. The Yankees. The Gathright. 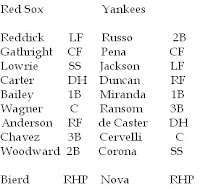 Red Sox WIN! 5-3 in seven innings. Game one of a double header.

Your glorious and smiling starting pitcher would be Mister Randor Bierd, so lush and handsome, if a bit of a dandy. Bierd pitched five and a third and only gave up two runs to the Yankees. One of them was a solo home run by Shelley Duncan, who's ferociously homely but the lad can hit.

Javier Lopez finished off the sixth inning for Bierd. It was perfect. Fernando Cabrera stepped in to close it out, but not before giving up a couple of hits... well, the Yurendell deCaster solo home run. The other hit was catcher Francisco Cervelli being an annoying shithead and bunting. Which name do you like better? Fernando or Francisco? They're both pretty happening.

I like the name 'Javier' myself. Very roguish. Although Yurendell... hmmm...

... A Sunday afternoon. It was a warmish day in Moosic, PA, 73 degrees and partly cloudy. The anthem played, the home team took the field, and the big baddies from Back East sent youngster Josh Reddick to the plate. Red flew out to center, but the Yankees weren't counting on seeing Joey Gathright! "Now batting for the Paw-tucket Red Sox... number 25... Joey Gathright..."

"Gathright?", the crowd was heard whispering... yes, Gathright. Who singled off Ivan Nova to kick it all off. Then Lowrie drew a walk. Two men on for Chris Carter... and a line drive to left! Gathright runs! Crushes third base, heads home full-bore! Crosses the plate... SAFE! 1-0 Pawtucket!

Jeff Bailey hit an RBI single and Mark Wagner, who also had a big night, doubled in the third Red Sox run. 3-0 Pawtucket.