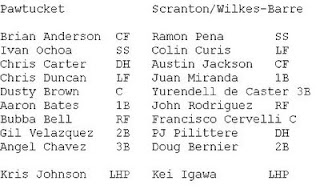 9-2 Yankees in seven innings. Kris Johnson continues to shine in triple-A! Johnson held the Yankees to only six earned runs on eight hits! Johnson also went deep into the game, getting almost three outs in the third inning! And so economical... 66 pitches through 2 2/3! Two strikeouts, to boot! WHO'S A SPECIAL, HANDSOME BOY??!

This game was pretty much over in the third inning, when the Yankees scored six runs. Pawtucket loaded the bases in the top of the seventh and Carter walked to score Bell from third, but then Chris Duncan flew out with the bases loaded to end the game. Have you heard about the lonesome loser?

two things:
1. Brian Anderson hit a solo home run to lead the game off. The line score must have looked like a bad bowling split, with the ones at each end.
2. Aaron Bates went 0-3 and struck out twice.
3. Jose Vaquedano gave up a pair of runs in the bottom of the sixth when Colin Curtis hit a two run double. Vaquedano then hit Austin Jackson with a pitch and got yanked in favor of The Lefty. No, not Hunter Jones.
4. Austin Jackson hit a triple.
5. The attendance at this game is listed as '1'.