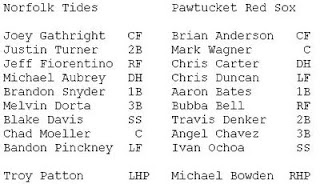 The offense was not to blame last night. Bowden had a rough start and only lasted three innings, giving up six runs to Norfolk. Vaquedano stepped in and only managed to get one out before being replaced by Rocky Cherry. It was almost like real baseball!

Pawtucket was ahead 6-3 until the fourth inning. Bowden was still in the game, but failed to get an out. Two walks and a single were all RJ needed to see. Vaquedano tried to help out, but after getting one out, he gave up a ground-rule double. Vaquedano then proceeded to throw a wild pitch, allowing Gathright to score from third.

After Vaquedano walked the next two batters, he was removed from the game. He is not as nails as he was during the first half, and I have no numbers to back my case up.

Lefty Troy Patton started for the Tides. Patton was a shipwreck. Who gives up six runs to Pawtucket? Patton pegged Chris Carter and then subsequently hit Chris Duncan, who did not think that was very funny at all.

Yeah, there was a lot going on in this game. It was a pretty memorable Poster Night.

alt-so:
1. Brian Anderson? Yes, please! Anderson can hit a little bit and that's a fresh of breath air at McCoy. He hit a three-run homer last night.
2. Rocky Cherry got his work in, going almost four relief innings. He gave up a pair of runs, but that's what happens when you work your relievers like Clydesdales.
3. Javier Lopez (not Vazquez, miscellaneous fans/sportswriters) and poor Fernando Cabrera provided scoreless relief.
4. Kam Mickolio is back in triple-A.
5. Travis Denker subbed in for Angel Chavez at third in later innings. I hope Chavez is okay, because no one plays third better. Denker is not a defensive upgrade over there.
6. Oh, yeah, Travis Denker is back. It has been said that Denker is atypical. He seems like he has other stuff going on and he might just be a guy whose job is 'baseball player'. At any rate, he is the opposite of Chris Carter.
7. Joey Gathright is a cool, cool center fielder.
8. This was a longish game at 3.5 hours for a standard nine innings.

I gotta run, but I'll be seeing you. Thanks to everyone for the past couple of days... I've had a lot of fun!
Posted by Jenks at 8:29 AM

so you changed the name well i like it