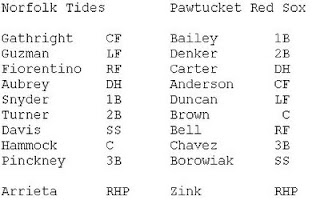 Charlie Zink gets the loss for Pawtucket because he gave up five runs. Jake Arrieta got the win.

Sean Danielson played in this game. I don't think he's worked since about April, so I'm glad he's feeling better.

et:
1. The Pawtucket paper wrote an article about "Future's at Fenway". They used the apostrophe throughout the article so it wasn't a typo. Paid. Sportswriters.
2. Jeff Bailey hit a 2-run single.
3. Rocky Cherry pitched two scoreless innings. Rocky Cherry works his ass off and deserves some recognition.
4. Wanna hear my tribute to Rocky Cherry: Thanks, Rocky!

I guess that's it. PawSox are on the road and will kick off their Charlotte homestand tomorrow. In NORTH Carolina. Wink.
Posted by Jenks at 11:15 PM