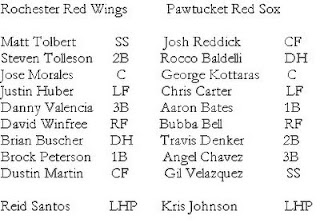 Hey, it's Reid Santos! I know him! Santos got the start for Rochester and he totally outpitched lefty Kris Johnson. Kris Johnson was worse than usual, even, only pitching 2 2/3 innings and getting his pitch count up to 71. Only 45 of those pitches were strikes. Jolines.

Pawtucket lost, is what I'm trying to say. On the plus side, Rochester had been crushed the night before so they recovered nicely. Even if it took ten innings.

So this is what it's like to be a Pirates fan? Huh. Nice curtains.

and then i feel nothing:
1. Sean Henn got a blown save and the win.
2. Vaquedano pitched two innings and gave up two home runs. If Vaquedano could return to his early season form, this team would start winning some ball games. KIDDING!
3. Enrique Gonzalez and Javier Lopez also pitched. Gonzalez would look a whole lot prettier if he smiled once in a while.
4. Aaron Bates hit his fourth Pawtucket home run of the season.